US residential storage on the rise in another record-breaking year 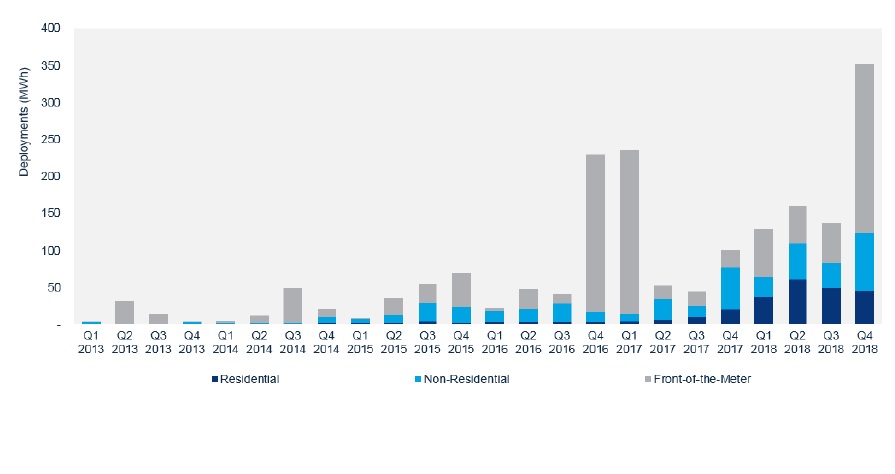 Energy storage enjoyed another record-breaking year of deployments in the US in 2018, while the residential segment is now “moving beyond early adopters” and into commercial viability, a report from Wood Mackenzie Power & Renewables claims.

Prepared in collaboration with the national Energy Storage Association, US Energy Storage Monitor 2018 Year-in-Review follows on from Wood Mackenzie’s quarterly editions of the report produced throughout the year.

Published at the beginning of this week, the company reports “robust growth” in both front-of-meter and behind-the-meter segments of the market through 2018, with 777MWh of energy storage connected to the grid – an 80% increase over 2017 install figures.

From almost doubling in size last year, Wood Mackenzie said the market could do so or better again in 2019, with a particularly strong performance in residential installations – a segment in which deployment figures quadrupled year-over-year. Wood Mackenzie analyst Brett Simon said this was due to a growth in understanding of the value that behind-the-meter, customer-sited energy storage systems could provide.

“The residential market is moving beyond early adopters who are seeking out storage systems for backup power,” Brett Simon said.

“We’re seeing the rise of opportunities for time-of-use shifting, solar self-consumption, and even some early examples of employing residential storage for grid services, such as by Green Mountain Power in Vermont and Liberty Utilities in New Hampshire.”

In megawatts, front-of-meter storage accounted for 47% of the overall market, from a total 311MW installed in 2018. While the report’s co-authors stated that they consider every single state of the US to either be an existing or emerging market, California, Hawaii, Texas and New York led the way in 2018.

By 2021, Wood Mackenzie and ESA expect the behind-the-meter segment to account for around half the total market value of energy storage in the US, while during 2018, an increasing number of utilities began exploring the value of BTM energy storage units on their networks, beyond the immediate benefits provided to the customer or household hosting the system on their property.

Meanwhile, there is a greater diversity of applications being explored for front-of-meter systems, Dan Finn-Foley, another Wood Mackenzie analyst, said.

“The value of front-of-the-meter energy storage is being recognized by an ever-expanding range of stakeholders. Its diversity and flexibility will drive the FTM market to the GW-scale by 2020, with further potential upside as non-traditional markets continue to emerge,” senior storage analyst Finn-Foley said, with a range of solar-plus-storage and standalone energy storage systems deployed in multiple geographies and targeting a range of applications.

During this year, regulator FERC will also enact FERC Order 841, through which regional grid operators will reconfigure wholesale markets to include wider participation from energy storage assets, which the report recognises as having the potential to positively impact the FTM segment in particular.

The report also looks into supply chain issues, such as shortages of lithium-ion batteries from Korean providers, which arose from rising domestic demand and expected trajectories for battery pricing. Wood Mackenzie asserted that battery rack prices could fall to below US$150 per kWh in the next five years, falling 6% during 2018, 7% the following year and by 10% in each of the next two years. Coincidentally, another analyst, Logan Goldie-Scot, who heads up energy storage research at Bloomberg New Energy Finance (BNEF), blogged yesterday on battery pack prices and their expected trajectory over the next few years, forecasting that by 2024, prices could be as low as US$94 per kWh, looking globally.