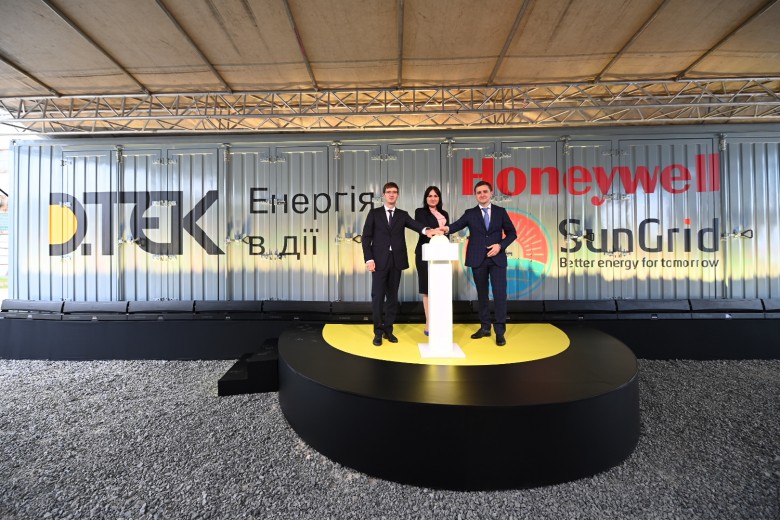 The first pilot deployment of a large-scale electrochemical energy storage system (ESS) has been completed in the Ukraine, less than a year after system supply contracts were signed.

Ukrainian energy sector investment group DTEK held an inauguration event including a briefing to announce commissioning of a 1MW / 2.25MWh lithium-ion ESS at the site of Zaporizhzhya Power Plant, a thermal power station which DTEK owns in the city of Energodar.

The company wants to use this initial deployment to establish the role that ESS can play in Ukraine’s energy sector from a number of perspectives: adopting high tech solutions like battery storage could help the country to decarbonise and increase its share of variable renewable energy on the grid and it could boost Ukraine’s energy security and security of supply.

“Our modern energy industry must become the driving force behind the growth of the Ukrainian economy and welfare of Ukrainians,” DTEK’s owner, Rinat Akhmetov said.

DTEK CEO Maxim Timchenko also said at an inauguration event held last Thursday that the ESS “will bring closer the synchronisation of our country with the European energy system ENTSO-E”. ENTSO-E is the European network of power system operators which includes 42 different transmission system operators (TSOs) from 35 countries.

The TSO group’s unified objectives across Europe’s interconnected grid include enabling the low carbon energy transition and making sure the internal electricity market functions are maintained; it also has to fulfil mandates given to it based on European Union legislation.

DTEK signed a contract with US technology provider Honeywell last July for the turnkey ESS’ delivery and installation, while Canadian battery storage engineering and construction company Sungrid also worked on the project. Meanwhile video posted by DTEK shows battery modules supplied by Powin Energy inside the system’s containerised cabinet. While the sytem was announced as a 1MW / 1.5MWh configuration last year, that appears to have been revised a little bit to the higher 2.25MWh capacity figure.

As reported by Energy-Storage.news at the time the contract was signed with Honeywell, the system is expected to perform various tasks, including providing frequency containment reserves to the grid and energy arbitrage, while DTEK said last week that it expects to get it certified as a “reserve capacity service provider” with national TSO Ukrenergo soon.

“The installation of the energy storage system comes at a crucial time for DTEK and Ukraine as we tackle the challenge of climate change and seek to transform the energy sector, by introducing low-carbon energy solutions,” CEO Maxim Timchenko said.

“Our goal is to become the leading entity in the decarbonisation of Eastern Europe. The recently connected ESS will allow us to do this, while simultaneously demonstrating our company and country’s commitment to the EU’s Green Deal and closer alignment with our European partners. This is particularly important ahead of the synchronisation of the EU and Ukrainian power systems in 2023.”

In a short video answering frequently asked questions about the project, DTEK said the Zaporizhzhya Power Plant site was chosen due to convenient logistics of the location and the “availability of qualified power engineers” who can learn how to operate the ESS. The 1MW system will allow both DTEK and TSO Ukrenergo to gain experience in connecting and operating ESS, the company said.

DTEK said lithium-ion batteries were chosen due to the “highest manoeuvrability” they provide with their fast charging and discharge speeds that no other resource in the energy asset toolset is capable of, and the company said lithium batteries are the most widely used and mature electrochemical ESS technology. The batteries used are expected to last 10-12 years in the field, while DTEK is also working on a lithium-ion battery recycling project with another of its enterprises.