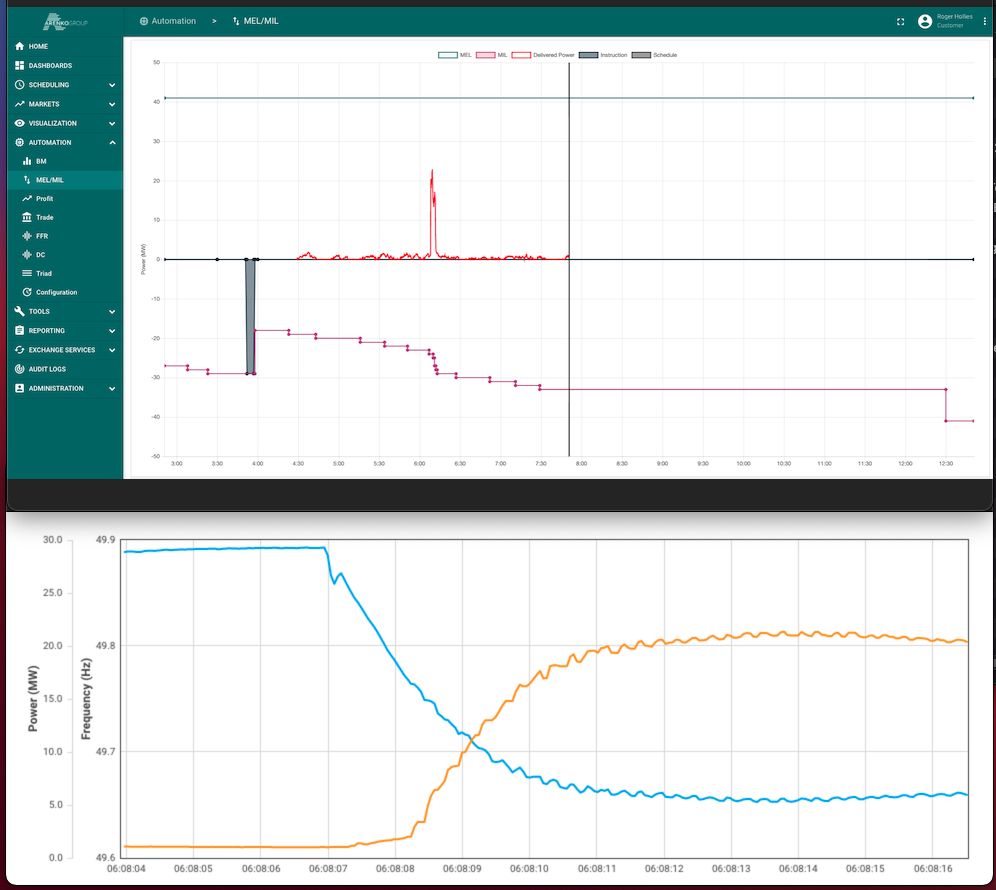 Arenko CTO Roger Hollies posted these graphs to LinkedIn from the same morning: at 3:52am on 29 January the company was paid to charge its battery asset at a negative price as shown on Arenko’s platform (top) then just after 6:08am the battery kicked in to help restore grid frequency as per its Dynamic Containment contract (bottom). Image: Thomas Wynne-Powell / Arenko.

The interconnector tripped at 6:08am, however frequency only dropped 0.25Hz – something which Arenko’s chief technology officer Roger Hollies told Current± would usually indicate that around 300MW had dropped off the system. However, as pointed out by National Grid ESO’s operational manager, William Ramsey, on LinkedIn, this was in fact a drop of 900MW, with Dynamic Containment helping to “take the sting out” of the loss.

Ordinarily, a loss of 900MW could “cause some serious problems for the system,” according to Hollies, however with Dynamic Containment controlling the fault, this wasn’t the case. Arenko automatically discharged its battery as part of its Dynamic Containment contract, having charged mere hours earlier, receiving a signal from National Grid ESO at 3:52am to charge at a negative price through the Balancing Mechanism (BM).

Hollies praised Dynamic Containment as having “fundamentally changed the way the system responds to faults”.

“In Dynamic Containment there's only 400MW contracted out of the targeted 500MW – which is then moving up to 1GW – but already we've changed the shape of the grid,” he said.

He also pointed to the interaction between the BM and Dynamic Containment, with stacking between the two allowed for the first time last month. He described the charging and discharging seen on Friday as “a beautiful illustration of how you can stack two very complex and very different operations, services and markets”.

However, he added that it is “a little bit limiting”, with the two being completely separate, meaning Arenko can only recharge with the energy its lost through Dynamic Containment, which itself is “quite a low use service”.

“But it's a great first step and a great demonstration of how this how this is going to work in the future.”

When asked by our sister site Current± how the stacking of assets in the BM and Dynamic Containment is fareing from the system operator’s perspective, Colm Murphy, electricity market change delivery manger at National Grid ESO, said that whilst it's still early days, from the initial response “we recognise the additional value that opening up the market and adding the ability to stack will offer”.

“We anticipate this additional flexibility will boost the grid's resilience, enable the transition to zero carbon and ultimately help to reduce balancing costs too.

“We're really excited to unlock the ability for power sources providing fast response through our Dynamic Containment service to stack in the Balancing Mechanism,” he added.

This story originally appeared on Current±.