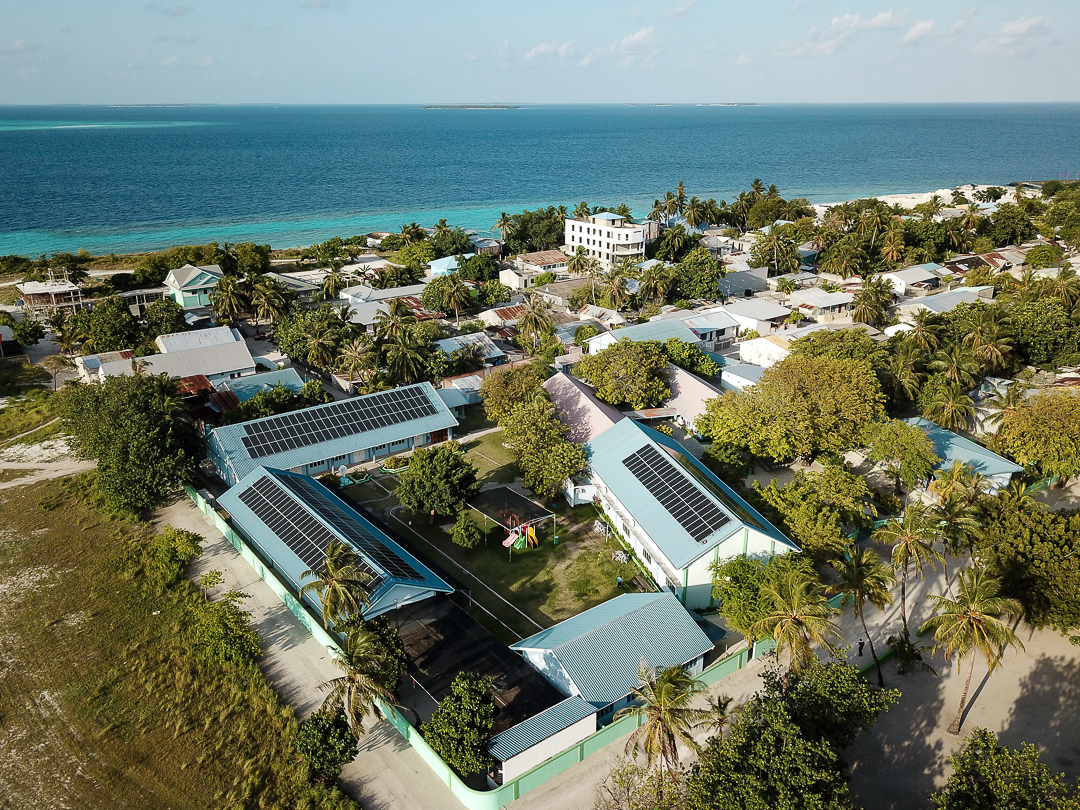 Maafaru, one of the 26 islands in the Maldives to have microgrids installed. Image: DHYBRID.

Updated 18 June 2021: Microgrids have been installed across 26 Maldivian islands using 3.23MWh of battery storage systems, with one shared SCADA system.

This is alongside 2.86MW of solar capacity and a new 6.72MW diesel genset, with the microgrids – which were installed on islands on the Shaviyani and Noonu Atolls – forming part of the Preparing Outer Islands for Sustainable Energy Development (POISED) project.

A central monitoring and control system (SCADA), known as the Universal Power Platform, dynamically controls all energy flows in the grid, from the battery inverter to a diesel generator – with the majorty of the Maldives' electricity coming from imported diesel – while also continuously measuring the grid and storage system parameters as well as the load profiles, prioritising solar energy where possible. The diesel generator is therefore only used when the combined power from the PV and storage system is insufficient. These new microgrids are monitored in state-owned utility Fenaka Corporation’s central monitoring stations at its headquarters in the Maldivian capital city of Malé.

Microgrid specialist DHYBRID was contracted to deliver the SCADA system as well as energy management system (EMS) technology for its customer, which was a joint venture (JV) formed by China National Machinery Industrial Corporation (Sinomach) and solar inverter company Sungrow. The Sinomach-Sungrow JV signed contracts with the Maldives government in 2017. The engineering, procurement and construction (EPC) sub-contractor was Sino Soar Hybrid (Beijing) Technology

Projects such as this one – which is sponsored by the Maldivian Ministry of Environment and the Climate Investment Funds and supported by the Asian Development Bank (ADB) – are of particular importance due to the high proportion of electricity generation through diesel that is consumed in the Maldives resulting in both high emissions and high costs to transport the energy.

PV installations and battery storage units are able to significantly reduce the diesel generators’ run times, helping to tackle those issues. Indeed, a PV installation with a power output of 100kW on the island of Fohdoo supplies around 30% of the island’s electricity, saving around 35,000 liters of diesel a year, with this a prime example of the benefits of these sorts of microgrids cited by DHYBRID.

Reducing the Maldives' reliance on diesel generation is a key part of the POISED project, which is aiming to transform existing diesel-based energy micogrids into hybrid renewable energy systems. In 2020, the Asian Development Bank (ADB) and the Environment Ministry of the Maldives launched a plan to roll out solar–battery–diesel hybrids across 48 islands for POISED.

Meanwhile, DHYBRID has been developing its SCADA technology over the past few years, announcing in 2018 it had partnered with data intelligence specialist firm QOS Energy to add monitoring capabilities to PV-plus-storage, energy storage and other hybrid plant configurations, with QOS' cloud-based monitoring and analytics platforms added into DHYBRID’s SCADA and controls technologies.

Benedikt Böhm, CEO of DHYBRID, said: “Most of the microgrids in use in the Maldives rely on our technology. We transfer this knowledge to our partners as part of our training programs so that they can continue to operate the installations as efficiently as possible.”

This article has been amended from its original form to reflect that the project was awarded to Sinomach-Sungrow's JV, with Sinosoar acting as EPC contractor, while DHYBRID's role was to supply EMS and SCADA technology, rather than install and oversee the entire project.