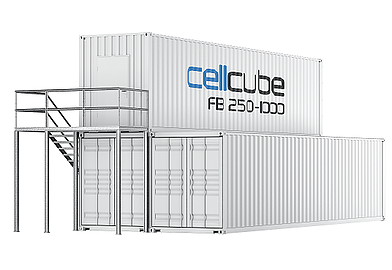 Redox flow energy storage systems, earmarked by Navigant Research to be one of the fastest growing electrochemical storage technology sets over the next decade, are being deployed in recent or upcoming projects by Cellcube Energy Storage Systems and Redflow.

Cellcube is the continuation of the line of energy storage systems dubbed VFB (‘vanadium flow battery’) and produced originally by Gildemeister Energy Storage. The German company’s VFB assets were acquired by Canada’s Stina Resources Group and the company changed its name to Cellcube Energy Storage Systems.

As previously noted, taking on a product with a history of testing early market appetite for long duration storage systems, Cellcube is targeting a level of vertical integration in its supply chain. Earlier this month the company also acquired Pure Vanadium Corp, a research and technology company licensed to produce vanadium electrolytes.

Last Monday, Cellcube announced the delivery of its first energy storage system in Germany, followed two days later by the announcement of an installation in New York. This morning, the company also said it has delivered a system to the University of Calgary, Alberta, Canada.

EnerPrax (‘Energy storage in practice’) is a proof of concept project in Germany, conducted by municipal utility Gelsenwasser at Saerbeck Bioenergy Park, a Smart City pilot. The site will test an unspecified number of Cellcube energy storage systems supplied through Cellcube’s local subsidiary Enerox. They will act as eight-hour storage units to provide baseload energy, stabilising the grid and shifting energy production to meet demand.

The arrival of a VFB at the University of Calgary this week is in order to advance research in vanadium and vanadium electrolyte production. In a recent interview, Navigant Research analyst Ian McClenny said that while flow energy storage is expected to grow its share of the stationary storage market significantly over the next 10 years, improvements in components and raw materials are still desirable. Cellcube said in a release that the electrolyte is typically around 30% to 40% of the total cost of the battery.

In New York, two Cellcube systems are being installed at the offices of electric power line contractor O’Connell Electric. Again, while sizing of the units was not disclosed, Cellcube said the batteries will be integrated into a solar-plus-storage microgrid that could lower onsite electricity costs by as much as 40%.

An O’Connell Electric spokesman said the VFB technology could help the company manage its peak demand and maximise solar generation, while also acting as a demonstration unit for potential customers. O’Connell is taking on the role of agents for Cellcube in the North Eastern US.

Meanwhile, Australia-headquartered Redflow, which started up shipments of its ‘ZBM2’ zinc-bromine flow batteries as complete units from its new factory in Thailand earlier this month, has struck a deal with Fiji’s national broadcaster.

Up to 60 units, and a minimum of five, will be deployed by New Zealand telecoms infrastructure specialist Hitech Solutions as part of the rollout of digital television services across the Pacific island nation.

Including remote areas, “more than 10 sites” will be fitted with ZBM2 batteries, following on from a successful trial deployment that has already taken place. As well as bringing digital TV to remote, often off-grid sites, the broadcasting equipment will be able to relay messages regarding topics including weather conditions and safety in emergency situations.

Hitech Solutions said the Redflow systems were chosen for their “robust design with a long service life”, while the battery maker claimed the ZBM2 solutions would weigh significantly less than the equivalent capacity of lead-acid batteries. Redflow has previously said it is targeting a production capacity annually of about 30MWh from its Thai production lines.

Read a feature article on flow battery energy storage and the race for commercialisation, 'Long time coming', here. The piece originally appeared in PV Tech Power and can also be downloaded from the 'Resources' section of this website.