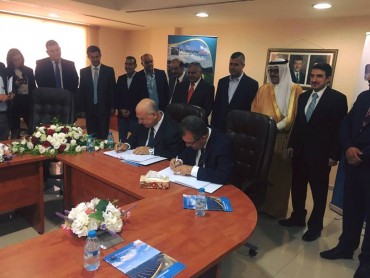 The power purchase agreement (PPA) for what is claimed to be the Middle East’s largest solar-plus-storage project has been signed.

Jordanian PV manufacturer and EPC Philadelphia Solar is developing the 11MW generation site, which will be paired with a 12MWh lithium-ion battery. The system will perform peak shaving and load shifting duties to support the grid during daytime hours.

The Irbid District Electricity Company has signed a 20-year PPA for power from the site. The signing was overseen by minister of energy and mineral resources Saleh Al Kharabsha.

Philadelphia Solar will install its own 320Wp polycrystalline modules and its own single-axis tracker for the project. Further details on the energy storage system were not provided and Philadelphia Solar was not available for further comment.

Jordan is energy-poor and relies heavily on fossil fuel imports from neighbouring countries. Historically, diesel and fuel oil have been the dominant sources of electricity but recent renewable energy tenders have helped to decrease this dependence.