Navigant: Lack of experience holding energy storage back as a non-wires alternative to T&D spending 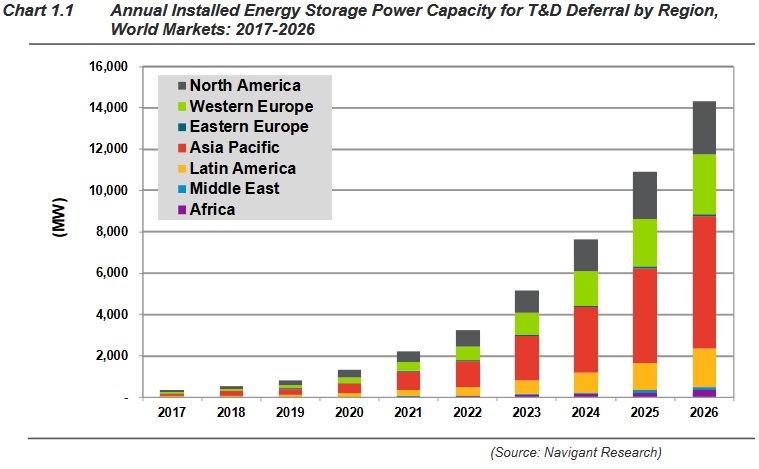 Energy storage will increasingly be deployed to save money on electricity transmission and distribution (T&D) infrastructure, with nearly half of the global market by 2026 to be found in the Asia-Pacific region, Navigant Research has said.

Since its inception in 2014 Energy-Storage.News has reported several times on the potential for network operators to decentralise, deploying energy storage systems and related distributed energy resources and therefore saving large sums of money on overhead wires and cables, substations and other infrastructure.

The earliest example on the site was a plan for New York demand management programme, using utility-owned distribution assets and customer-side resources, that would have saved utility Consolidated Edison (Con Edison) from building a new substation and upgrading two others at an estimated cost of US$1 billion.

While the associated cost of that programme was expected to be US$200 million, some questions have been asked about the effectiveness of the programme, which includes aggregated energy storage at customers’ houses. Part of that was to do with the fact that the cost of substations themselves have dropped since early analyses were made.

The lack of comprehensive cost-benefit analysis of T&D spending deferral to date is one of several barriers preventing the growth of this application for energy storage, according to Navigant Research’s Alex Eller, lead author of the ‘Energy Storage for Transmission and Distribution Deferral’ report.

The report looks specifically at the use of C&I (commercial and industrial) and aggregated behind-the-meter household systems in replacing T&D system architecture. Eller and principal research analyst Anissa Dehama wrote that there is a “lack of confidence on the long term value of storage due to limited data on deployed storage projects for T&D applications.”

On a similar theme, there is still a general lack of understanding of and familiarity with energy storage and what it can do, even among utilities, grid operators and regulatory bodies, the Navigant team said. Meanwhile most grid modelling and simulation systems are yet to recognise what the report calls the “complex nature” of energy storage, including its use for delivering multiple front-of- and behind-the-meter services, sometimes simultaneously.

As is often heard in energy storage, regulatory treatment is also still an issue, with many regulators still finding their way around how to define energy storage and its role – or possible roles – in the grid. Better regulatory clarity would also make investing in energy storage more straightforward, from deciding how utilities could make money from it to being able to create energy storage-as-a-service offerings that could enable third-party ownership business models.

Additionally, energy storage is facing competition from other so-called ‘non-wires’ alternatives, namely demand response (DR) and demand side response (DSR), although in some ways they could be considered complementary technologies that could work together. Some demand response programmes include not just demand turn-down where businesses curtail some of their energy use to reduce strain on the grid, but also active kinds if demand response where energy storage systems inject power onto the grid to meet a shortfall in supply.

During 2017, Navigant predicts, some 331.7MW of energy storage will be deployed for T&D upgrade deferral as well as to optimise T&D assets. This annual figure balloons up to 14,324.8MW by 2026, making for a cumulative 46,499.7MW installed. An estimated 42.5% of these megawatts will be at the distribution-level, which Navigant pointed out will be useful for utilities to help accommodate growing capacities of solar PV generation and electric vehicles (EVs) connecting to the grid.

By 2026 Navigant forecasts that nearly 20,000MW, (19,517.3MW) of T&D spending deferral energy storage will be installed cumulatively in the Asia-Pacific region, around 42% of the global market, while the next two biggest regions, North America and Western Europe, will have installed 20.7% and 20.6% of the global cumulative total respectively in eight years’ time.

Navigant seems to sense particular enthusiasm for the ability of aggregated behind-the-meter storage systems to deliver many of the T&D-related benefits, although the authors acknowledge that installations in this segment remain small in number.

Other recent examples where energy storage systems have been installed to form decentralised solutions, instead of building out central grid networks include a recent offer by New Zealand utility PowerCo to install solar-plus-energy storage microgrids, backed by diesel generators at remote communities. PowerCo found this to be a more cost-effective solution than building out T&D infrastructure to reach its remote customers’ houses.