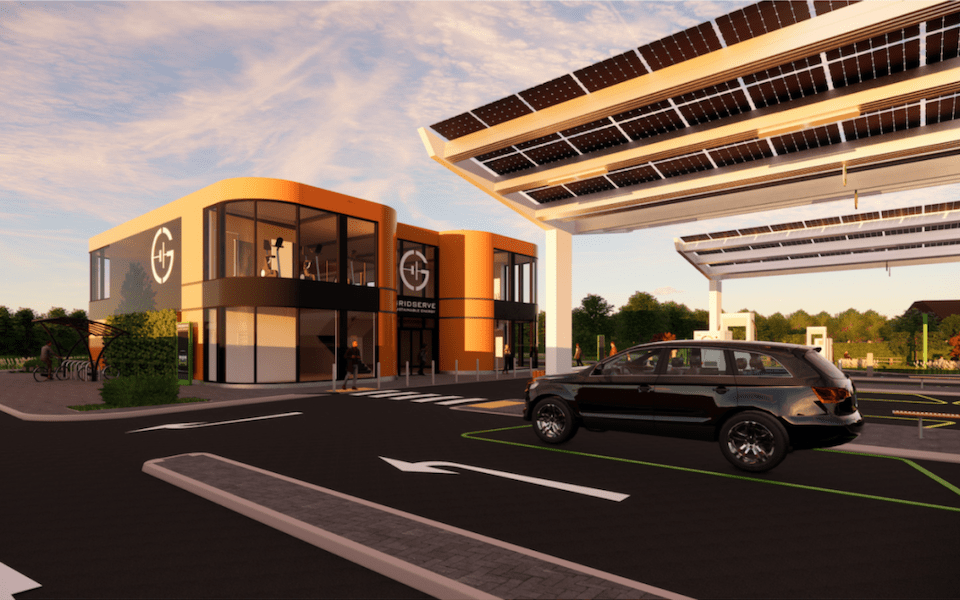 New business models are meeting new technologies in vehicle electrification, such as the ‘electric forecourts’ that UK solar and EV charger project developer GRIDSERVE is seeking to deploy. Image: GRIDSERVE.

Moving from today’s gas stations to their electrified equivalent can present a challenge so “dramatic” that in some cases, microgrids may be the only viable solution, a representative of Schneider Electric has said.

Schneider Electric already provides standardised solutions for refuelling stations based on internal combustion engines and is near ubiquitous in that market in the US in particular. Andy Haun, senior vice-president and chief technology officer (CTO) at Schneider’s microgrid division told Energy-Storage.news that in the transition from centralised fossil fuel generation to distributed, lower carbon energy, in order to provide financial benefit, environmental benefit as well as the increasingly important aspect of resiliency – “to do all three of those things together you actually have to have a microgrid”.

The company is offering bundled packages of microgrid solutions that can integrate solar PV, batteries and other technologies such as generators for backup to provide electric car charging “as a service”. Haun said that the company’s microgrid technologies including charge controllers and integrated with its Ecostruxure internet of things (IOT) solution hits a real “sweet spot” for installations between 1MW and 5MW where the impact of charging several electric vehicles from the grid can be “dramatic”. Such microgrids would be grid-connected, but capable of being islanded from it in the event of power outages or natural disasters.

“Our ability to put islanding – integrated, automated with load shedding with the asset controls – and the grid interactivity allows a microgrid to be completely serving a site for its critical loads, essential loads for its carbon footprint and its low-cost energy,” Haun said.

‘Opportunity to put in charging as a service infrastructure’

The UK recently got its first-ever 'electric forecourt', where EVs can be charged with solar power, and more are on their way from developer GridServe after it struck a partnership with tech giant Hitachi. Energy-Storage.news also just reported on the deployment of 2MWh of battery energy storage at what is described as Europe's biggest electric car charging park with more than 100 chargers onsite – and an organic bakery. Meanwhile the link between the batteries in EVs and stationary storage batteries grows stronger with a variety of other business models and projects. While Schneider Electric microgrid CTO Andy Haun said there will be different solutions for different scales of charging, his unit at Schneider is focused on customers that might be procuring EV fleets, or replacing traditional gas station operations, or even retailing EVs – anywhere that edge of grid capacity can be constrained enough to present a challenge in providing a seamless 'refuelling' experience.

The demand for power from EVs on the electric grid can have a “dramatic impact” at the distribution level, Haun said, creating a burden that did not exist when transportation was centred around large fuel trucks hauling diesel and gasoline around. A recent webinar on the history of microgrids by Homer Energy founder Peter Lilienthal included the factual snippet that the power demand of light vehicles alone could be 10x the amount of power generated by electric utility generation in the US today.

“There’s an opportunity in place to put in charging as a service infrastructure, or a forecourt that they could then go and monetise the charging value, they want to do it quickly they would put in their own infrastructure to do this”.