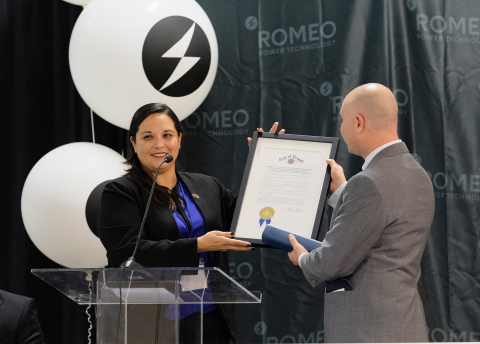 Start-up Romeo Power has opened a lithium battery pack factory in Los Angeles, aimed at the EV and stationary energy storage markets, aiming to ramp up to 4GWh production capacity by next year.

Romeo Power, which has Porter Harris, a former SpaceX battery engineer, as CTO, hit headlines in late August when it mobilised US$100 million towards getting its manufacturing operations started. This included US$30 million which was raised in seed financing and a claimed US$65 million pipeline of advance orders. Romeo produces cylindrical cells for electric mobility and a stationary storage product called Powerstack.

The company has completed work on an 113,000 square foot battery pack manufacturing facility and held a ceremony last week to inaugurate it officially. The factory is in the city of Vernon near downtown Los Angeles, Romeo Power said. It will produce battery packs at all scales from 1kWh to 1MWh, with all devices designed, tested, engineered and produced at the site. The LA factory also has its own research and development facility.

By the end of this year, the factory should have produced 1GWh of battery packs, a production capacity the company says will quadruple to 4GWh during next year. Romeo said chief production officer Mark Schwager was previously responsible for overseeing the design and building of Tesla’s Gigafactory in Nevada.

While Romeo has given scant details on its battery technology, the company claims a 25% improvement in energy density over typical rivals’ devices and says its batteries can charge 15% to 30% faster than other comparable lithium batteries, as well as being protected against thermal runaway.

The Langen plant has a 600MWh production capacity, equivalent to putting battery packs in around 3,000 hybrid or electric commercial vehicles each year. Akasol said it already has contracts in place with two European bus manufacturers.

While Tesla built its Gigafactory a couple of years ago and is still in the process of ramping up production to the expected 35GWh of cells and 50GWh of battery packs a year by 2020, the majority of global lithium battery manufacturing is still hosted by Chinese, Japanese and Korean companies like Panasonic, BYD, Samsung SDI and LG Chem. Carmaker Daimler, which produces energy storage systems under the Mercedes-Benz Energy brand, opened a €500 million (US$561 million) lithium-ion battery factory in Kamenz, Germany, in May, at a ceremony attended by chancellor Angela Merkel.

In the rush to compete, plans have emerged for two potential European ‘Gigafactories’ in recent months by TerraE Holding and Northvolt, with the latter signing up ABB as a technology supplier. Meanwhile, Dr Rahul Walawalkar of the India Energy Storage Alliance (IESA) told Energy-Storage.News earlier this year that India could have “multiple Gigafactories” by 2019 as firms seek to invest in the rapidly expanding clean and distributed energy sector.