he Full 2016 results are expected to show growth of 55% compared to 2015. Credit: Leclanche
Lithium-ion energy storage manufacturer Leclanch&eacute; saw revenue of around CHF28 million (US$28.89 million) through H1 2016, up 65% year-on-year, according to the firm&rsquo;s interim results for the half year ending 30 June 2016.

Leclanch&eacute; had planned for a 100% increase in revenue, but was hampered by a delay in financial closing of its 120MW / 53 MWh IESO energy storage project in Canada, one of the largest grid ancillary services projects in the world, as well as a fire at the company&rsquo;s cell manufacturing facility in Germany.

Anil Srivastava, Leclanch&eacute; chief executive, said that while the delay in financial closing was unfortunate, this revenue will be recognised in the results for H1 2017. The company is on track to commission the first site by Q4 this year.

The firm is also on a trajectory to&nbsp;break even in EBITDA terms in&nbsp;2018 or sooner. &nbsp;Reaching this point will require roughly 100MWh of delivery and commissioning each year.

In H1 this year, Leclanch&eacute; secured a total of 145MWh of energy storage projects, with 75MWh confirmed and another 70MWh &nbsp;in the pipeline, representative of a 30-fold increase in confirmed projects. The pipeline is due for delivery between Q4 2016 and the first half of next year.

The company has also signed a breakthrough investment partnership with an independent owner and operator of energy storage assets to develop and finance projects globally.

The firm has formed project teams in the US and will also soon form teams in India.

In its specialized business, the firm won contracts to supply batteries for automated guide vehicles for two multinational companies, as well as to develop Ni-Mh batteries for ArmaSuisse and a five-year contract with submarine and terrestrial drone manufacturer ECA.

In May, Leclanch&eacute; also supplied lithium-ion batteries to power a ferry in Latvia, hailed by Leclanch&eacute; as &ldquo;the world&rsquo;s fastest electric commuter vessel&rdquo;, for an EU demonstration project.

Anil Srivastava, Leclanch&eacute; chief executive, said: &ldquo;Leclanch&eacute; is one of the fastest-growing companies in the world operating in the industrial-scale energy storage market. I am pleased to report that the company has achieved key milestones that were set out in the growth plan endorsed by a vast majority of our shareholders during the AGM held on 4 May 2016. 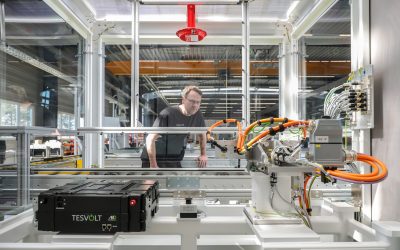 October 4, 2021
News in brief from around the world in energy storage.