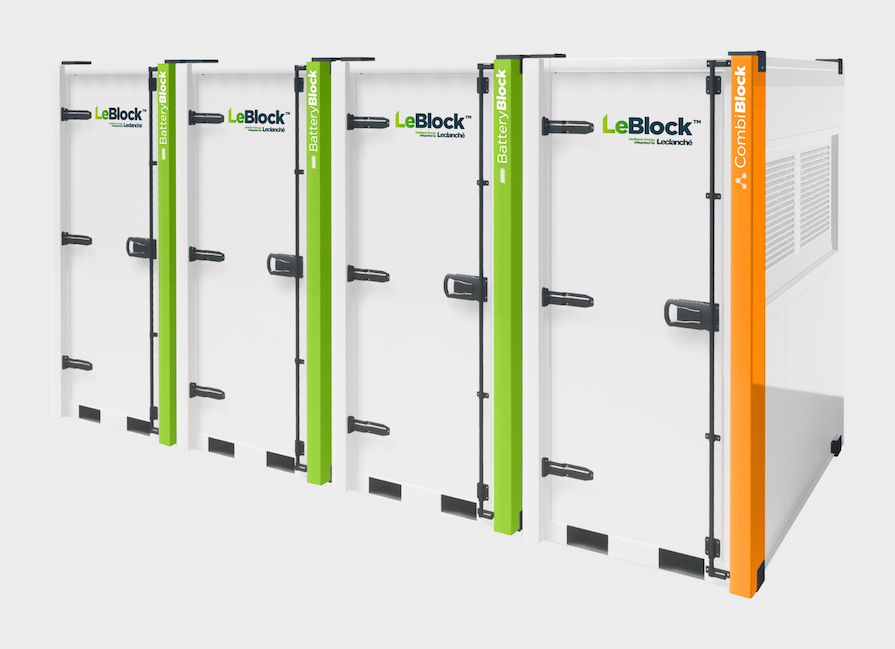 Aimed at reducing the cost, complexity and environmental footprint of stationary energy storage system (ESS) installations, Leclanché has launched a modular battery storage solution based on easily transportable, plug and play racks that can be put together onsite.

Called ‘LeBlock,’ the concept puts liquid-cooled lithium-ion battery racks into 5ft ‘blocks’ with integrated fire protection systems and each with a capacity of up to 745kWh of lithium iron phosphate (LFP) batteries. Several BatteryBlocks can then be interlinked using a piece called the CombiBlock which includes temperature control equipment, to build up the customer’s desired ESS size and capacity.

The Swiss battery storage technology company’s engineering and product teams were motivated by the growing market demand for larger, higher-voltage and higher rated capacity battery systems that required new concepts for enclosures while also optimising every possible aspect of the value chain, Daniel Fohr, Leclanché’s vice president for system engineering, said in an exclusive interview with Energy-Storage.news ahead of today’s launch.

“That means: manufacturing, transport, integration, installation onsite and operation — even up to recycling. That led us to come up with a new integration concept. The solution clearly was to simplify it and even maybe to find a way that the enclosure itself becomes the large body of the battery that is not only protecting and making it connectable to the larger sites, but also make it safe and transportable. All of that we wanted to do with not only looking at the lifetime cost of energy, but also massively reduce our logistics, carbon footprint and other environmental impacts.”

With each battery block having the same form factor — even the blocks that contain the infrastructure equipment — as well as identical interfaces to connect them together, the blocks are “mechanically, electrically and even thermally” interchangeable. This allows them to be assembled in many different configurations to suit each project, Fohr said, including the integration of equipment for electric vehicle (EV) chargers, like low voltage inverters, transformer components and charge controllers for DC fast charging.

For transport as well, up to five blocks can be fitted into a 20ft ISO container for shipping, trucking and unloading with forklifts. The containers have the required Container Safety Convention (CSC) certification to simplify the process of getting them shipped and then once onsite can be unpacked and dismantled to be laid out as per the customer’s needs.

While it fits just under 750kWh of lithium iron phosphate batteries, LeBlock can also be integrated with other types of battery and also multiple types and makes of inverters. Connecting up the BatteryBlocks in parallel, the CombiBlock ‘connecting piece’ contains the Leclanché energy management system (EMS) and equipment for monitoring the system’s performance, as well as thermal management.

‘As simple to build as a children’s building block set’

The interlinked battery rack concept also means there’s no need for site-specific cabling and systems can be upgraded and individual battery racks removed and replaced without having to re-engineer the whole project, the company claimed.

As well as assisting the ease of installation onsite, having all the integrated equipment coming directly from one manufacturer means fewer additional transport vessels bringing different parts and packaging waste — which Daniel Fohr said is an often underestimated and significant financial as well as environmental burden —  can be eliminated. These considerations are particularly acute for projects in remote areas such as island microgrids and transmission and distribution infrastructure sites that can be difficult to reach, but are nonetheless also challenges in built-up areas too.

“It's all coming fully populated, fully pre-assembled, we'll just place them, connect mechanically and electrically and you're good to go,” Fohr said.

The partitioned system architecture is also an advantage from a fire safety perspective according to the company and the products have been tested to recognised standards including NFP 855 and UL9540A. Initial deliveries are set to begin in the fourth quarter of this year. In March, Energy-Storage.news reported that Leclanché secured funding from its main shareholder group that would allow the company to push forward with several projects around the world as well as what CEO Anil Srivastava said at the time would be a “significant product launch”, which Leclanché has now unveiled today.

“Our design imperative was to create a complete solution that, conceptually, was as simple to build as a children’s building block set. With LeBlock, and coupled with our leading EMS platform, we believe we have achieved this business objective,” Leclanché CEO Anil Srivastava said.

“LeBlock is designed to assist utility and energy project managers seeking a less complex, reliable and cost-effective solution to replace or increase the reliability of the grid while helping to reduce carbon footprint and the impact of power generation on the environment. It’s ironic that many energy storage installations today ignore the short-term impact on the environment, system upgradability and end-of-life issues to bring a solution to market.”

Other energy storage technology providers have in recent months launched products aimed at large commercial to utility-scale battery storage applications that have similarly aimed to increase the modularity and standardisation of ESS solutions and components, notably Fluence's launch of its sixth generation ESS range called CubeStack last summer and Wärtsilä's launch of GridSolv Quantum a couple of months later, while others such as Saft and Tesla have gone for an approach based around packing more power and energy capacity into large pre-designed systems with the 2.5MWh Saft Intensium Max and Tesla 3MWh Megapack respectively. 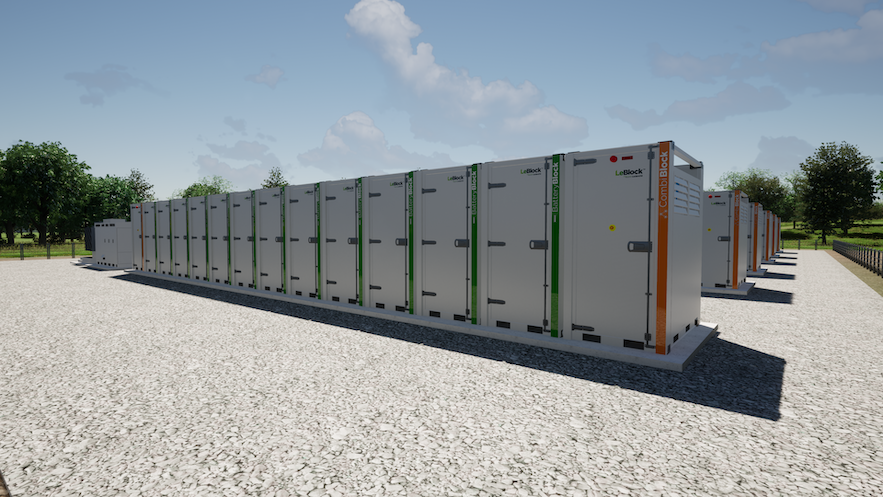