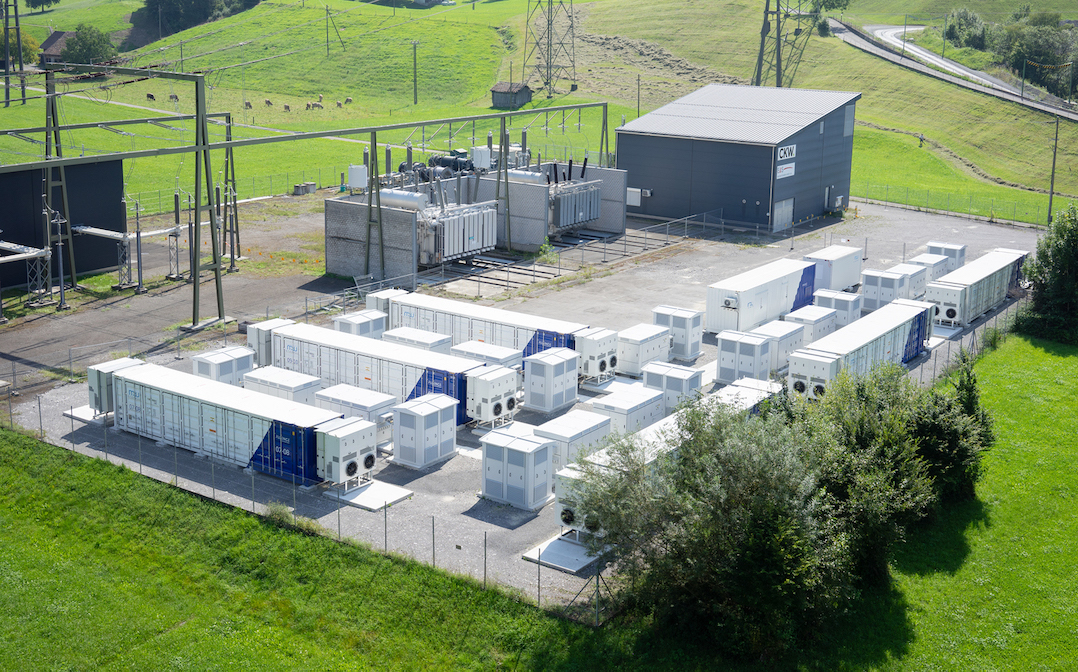 A 20MW / 18MWh containerised battery energy storage solution in Switzerland, which went online late last year. IHS Markit predicts that while the US will dominate this year and the Asia-Pacific region will rapidly grow market share in the coming years, Europe will see a growth in installations year-on-year of about 70% in 2021. Image: MW Storage AG.

Analysis and research firm IHS Markit has predicted that over 10GW of new energy storage will be deployed during this year, with around half of those additions in the US market.

The company said in a new report that this would be more than double the 4.5GW of global capacity additions in 2020. Meanwhile the US’ strong lead will continue with the market gaining in share until 2023, when IHS Markit senior analyst for clean technology George Hilton said the pipeline in the country reduces.

His colleague, IHS Markit director for climate and sustainability Sam Wilkinson said that the US market will triple in size year-on-year, with energy storage beginning to provide capacity “at a significantly wider scale,” while development cycles will be complete for solar-plus-storage installations that have taken advantage of the Investment Tax Credit and those projects begin to come online.

The ITC in the US reduces the tax burden on solar energy projects through to the end of 2025, and applies to energy storage if installed at the same time and co-located as solar projects. While the ITC had been originally expected to expire in 2017, it has been extended twice and remains at 26%. It begins to fall in 2023 to 22% and in 2024 will fall to 0% for residential solar and 10% for commercial and utility solar. The energy storage industry, led by the national Energy Storage Association, has lobbied for the introduction of an ITC applicable for standalone energy storage but action has yet to be seen on this front.

Partly, but not only, driven by the ITC, combination with solar is becoming a “major driver” of energy storage, Wilkinson said. In the US, 1.3GW of tenders for solar-plus-storage have been awarded or announced in the past six months alone. Worldwide IHS Markit is forecasting that 3.8GW of storage colocated with solar will be installed. In 2020, the figure was just 0.9GW. Lawrence Berkeley National Laboratory said in August last year that at that time, around 28% of 102GW of solar PV projects in US interconnection queues were hybrids paired with storage.

Asia-Pacific to drive forward from 2025, Europe to have a big year in 2021 while emerging markets will see early progress

“The energy storage industry will begin significant multi-year growth in 2021, continuing until 2030, as the technology begins to form a core component of power grids in developed markets and new opportunities in developing markets continue to emerge,” IHS Markit's George Hilton said on a blog for his company's website. He added that providing grid stability and integrating higher shares of renewable energy into energy networks as decarbonisation efforts around the world take place were broadly speaking the main drivers of activity.

As was recently predicted by rival research firm Guidehouse Insights, IHS Markit said installations in the Asia-Pacific region are set to pick up pace in the coming years. IHS Markit forecasts that activity in mainland China will drive the wider region forward from 2025 onwards, with Asia-Pacific deployments accounting for 44% of the global market by 2030.

Meanwhile, Guidehouse predicted recently that, again driven by activity in China, the Asia-Pacific region could overtake North America as the world’s biggest market as early as 2023. Another research company, Wood Mackenzie Power & Renewables, has forecast that front-of-meter energy storage costs in Asia-Pacific’s leading markets, China, South Korea and Australia, will fall by about 30% by 2025. China continuing to lead global lithium-ion cell manufacturing capacity for another decade will contribute strongly to this, although Wood Mackenzie believes cost reduction efforts for all other components of a system including balance of plant equipment will also come into play.

Elsewhere, Europe’s energy storage market will grow significantly during this year, IHS Markit said, increasing by around 70% from 2020, due to a combination of new opportunities in frequency response, capacity and renewables colocation markets.

Meanwhile, frequency response opportunities are becoming “saturated in established markets,” but emerging global markets that are in the “early stages of development” will see those ancillary grid balancing service applications play a role in growth, Sam Wilkinson said. Countries including the Philippines, Taiwan, Italy and the Nordic countries will see frequency response drive the development of their first commercial battery installations, which are likely to come online in 2021 and 2022.

During 2020, IHS Markit said that opportunities for the energy storage industry had developed despite the COVID-19 pandemic. The company had forecast for >5GW of deployments globally in 2020, which it revised down slightly when gathering figures at the beginning of this year. Either way, figures show a trend of continued growth, with the company recording 2.7GW of global capacity addition in 2019.