In 2017, the energy storage market saw formidable growth, similar to the trajectory that the solar market took nearly ten years before. With the U.S. market surpassing the impressive 1GWh mark, the news cycle has been dominated by massive deployments, monumental M&A activity, cutting-edge technology innovations and crucial policy developments.

The energy industry is keeping close tabs on energy storage as a promising solution for the aging electric grid, as well as a cost-effective choice for new capacity.

Despite the solar industry experiencing significant impacts from the recently-imposed Section 201 tariffs for imported PV modules, the broader energy storage market will remain fairly insulated from these effects due to the prevalence of standalone storage applications. As highlighted by GTM Research analyst Brett Simon during his presentation at Intersolar and ees Summit USA East in April, the energy storage market is predicted to reach US$3.8 billion in annual value by 2023. For solar developers looking to endure the impacts of the tariffs, many are turning to energy storage to add new value streams to existing projects and improve overall system economics.

In the face of federal headwinds, an increasing number of states have risen up to declare their commitment to the growing energy storage market. On the coasts, both California and New York have announced significant renewable energy targets that will require storage in order to feasibly integrate intermittent generation into their regional grids. California’s Self Generation Incentive Program (SGIP) has allowed behind-the-meter deployments to flourish, fortifying the Golden State as the frontrunner of the energy storage market. New York has also become a top contender in the space, given Governor Andrew Cuomo’s recent pledge to deploy 1,500 MW of storage by 2025. These statewide commitments are proving that energy storage is moving beyond the partisan politics that are seen at the federal level. Commissioner of the Arizona Corporate Commission Andy Tobin is an influential Republican who has spearheaded a proposal for the largest storage mandate in the country: 3GW of storage in Arizona by 2030. Storage is no longer regarded simply as a means for environmental advocacy, it is now accepted as a means to provide low-cost electricity that can stabilize the grid in the long-term. 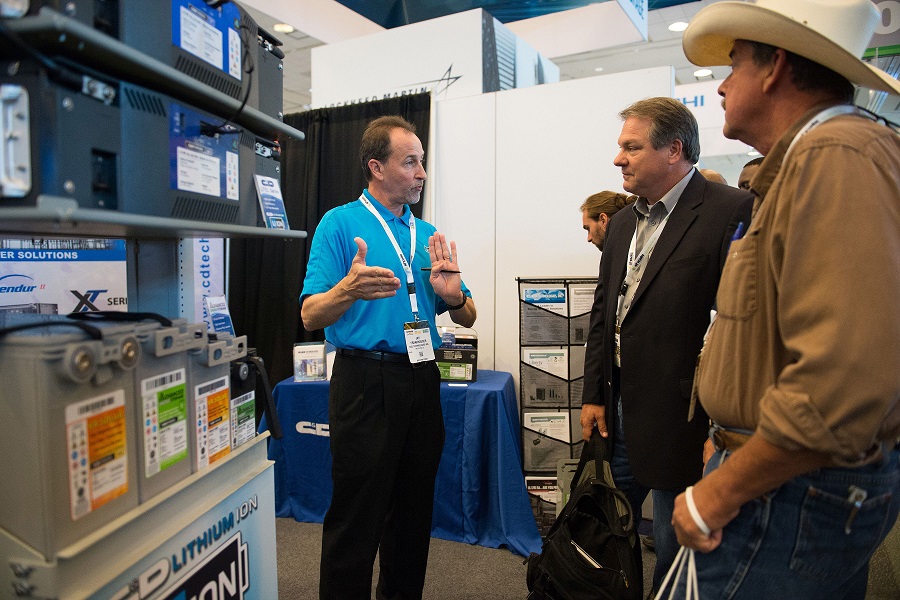 Historically, cost has been one of the greatest barriers that has hindered deployment of energy storage technologies in the United States. While hardware costs have significantly declined, software and distributed energy resource management systems have enabled asset owners to unlock new services and revenue streams from the renowned “value stack”. The Rocky Mountain Institute (RMI) has reported that energy storage can offer up to 13 different services to stakeholders, including customers, utilities, independent system operators and regional transmission organizations. By targeting one or more services, software and DERMS providers have begun to establish new business models and financing mechanisms that make energy storage technologies more attractive to stakeholders who may be reluctant own energy storage assets.

As costs continue to fall for lithium-ion battery technology, the energy storage industry may be able to leverage long-duration batteries to provide peaking capacity for North America’s aging electric grid. In a recent report from GTM Research, four-hour energy storage system units could start to become cost-competitive with new peaker plant capacity within the next 5 years.

In light of these findings, utilities are likely to shift their focus away from behind-the-meter assets (i.e. Tesla Powerwalls) to large-scale, front-of-the meter energy storage applications to replace aging natural gas peaker plants. Due to the high demand for gas powered generation, energy storage technology is poised to disrupt the market with new peaking capacity across a variety of states in the U.S.

Energy storage will become a centerpiece of the electric vehicle ecosystem

Governments and utilities are preparing for the impending electric vehicle (EV) revolution. Recent reports from the Edison Electric Institute and the Institute for Electric Innovation expect the number of EVs on the road to increase from 567,000 at the end of 2016 to seven million by 2025. With existing infrastructure, the electrification of the light-duty transportation sector (comprised of vehicles with a payload capacity of under 4,000 pounds) will incur high demand charges for drivers who are charging their vehicles during peak hours. A report from McKinsey & Company noted that these charges can range between US$2 and US$90 on a per kilowatt hour basis and could ultimately deter new drivers from adopting EVs. 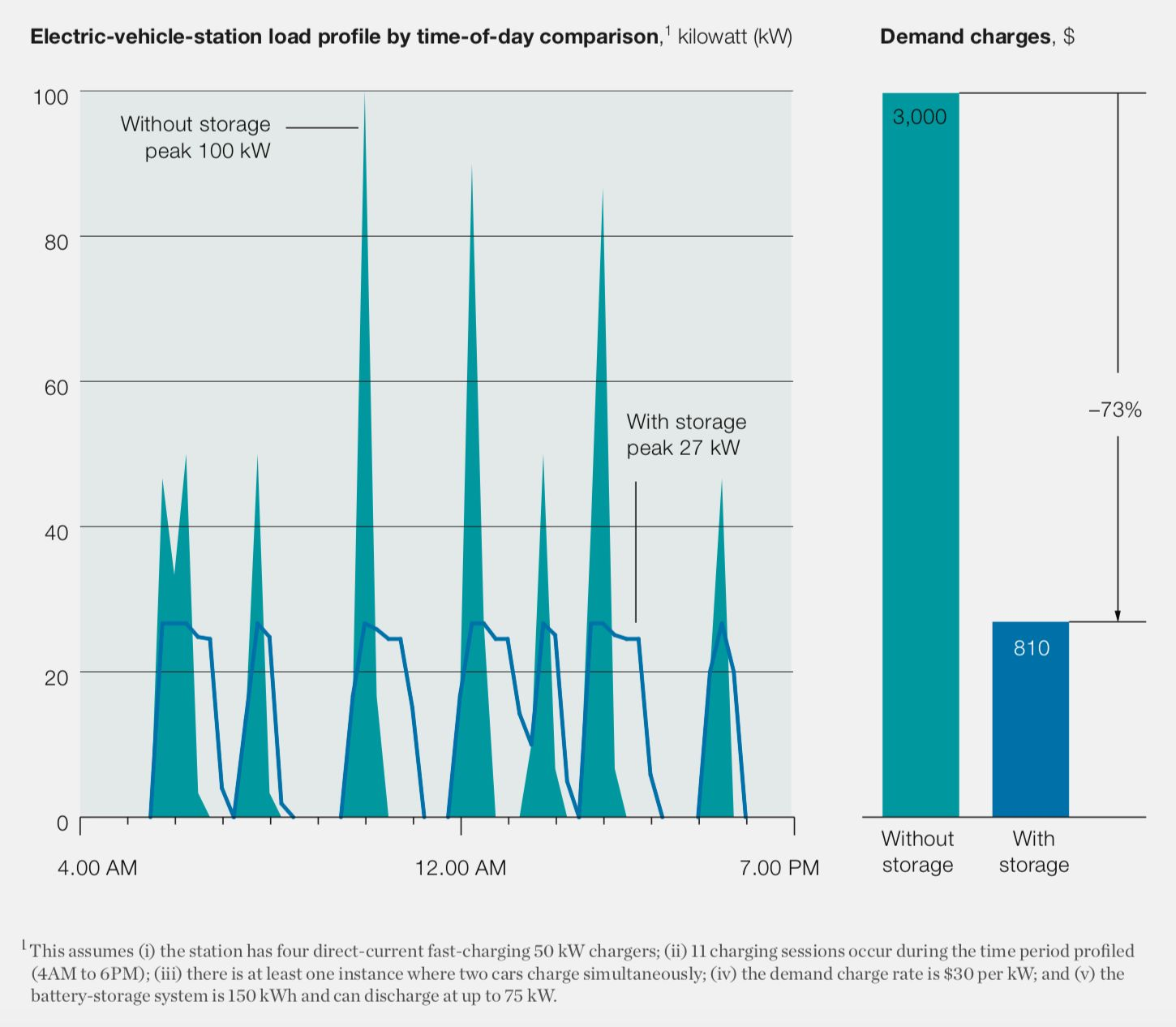 Energy storage’s unique peak-shifting capabilities can discharge off-peak power during a spike in electricity demand. As stated by the report, energy storage can reduce demand charges for commercial customers by 73% to enable a more affordable charging ecosystem for drivers and utilities alike. As demand is distributed across EVs, new energy storage deployments will play a crucial part in balancing and upgrading grid infrastructure. 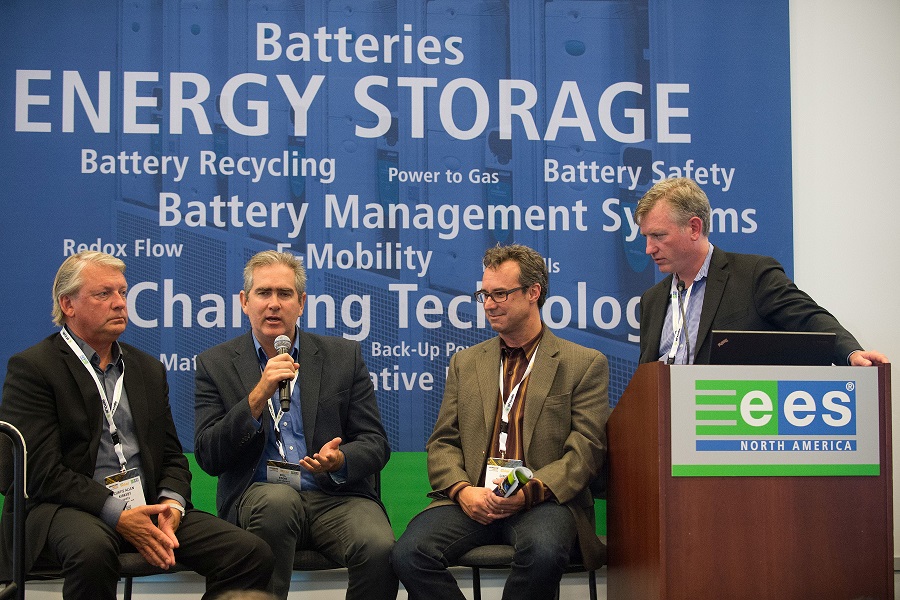