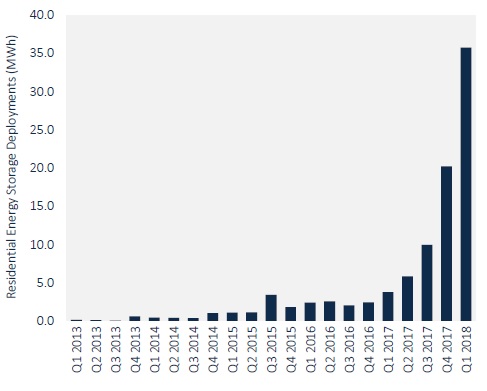 The residential energy storage market in the US has just enjoyed one of its biggest growth spurts so far, although action is mostly centred in specific states with supportive policies and conditions.

That was the main finding of GTM Research’s just-published Q2 2018 US Energy Storage Monitor, out today (6 June 2018). It said that 35.8MWh of energy storage were deployed in the residential grid-connected segment in the US in the first quarter of this year. This was as much as the entire country managed in the preceding three quarters, the company said, with the steep rise shown in the graph below.

As in September 2017’s US Energy Storage Monitor, which at the time reported the US’ busiest-ever quarter for behind-the-meter storage, the solar-friendly states of Hawaii and California led the way. That report found 4.7MWh of residential storage systems deployed in the second quarter of 2017, which was an 89% growth over the previous quarter, showing just how far the sector has come in the latest reckoning.

Once again, California and Hawaii drove adoption, with some 74% of all residential adoption in those states. The pair have supportive policies that include Hawaii’s push towards 100% renewable energy and California’s SGIP (Self-generation incentive program) which offers subsidies for energy storage if installed with solar PV. They are also both moving towards revised net metering programmes and time-of-use rates for retail customers which incentivise self-consumption of solar and reduction in grid demand at peak times.

“These policy trends are expected to continue as utilities and regulators work to deal with increasing levels of solar PV penetration, which are driving increasing residential storage demand. Several residential solar installers already claim storage attachment rates for new solar PV of up to 20 percent in select regions such as southern California, indicating a strong market for the technology.”

Overall, the US deployed 126MWh of energy storage in the first quarter of this year, a 26% increase on the final quarter of 2017. While it compares somewhat unfavourably with the ‘record-breaking’ first quarter of 2017 and Q4 2016, those two quarters had their deployment figures skewed upwards by activity around California replacing grid capacity in the wake of the Aliso Canyon gas leak, when over 100MWh of four-hour duration energy storage projects were fast-tracked.

GTM in March said the US could smash the gigawatt-hour mark for energy storage deployments during 2018 but in the latest release appears to state that 2020 will be the first year this happens. The US installed just over that number (1,080MWh) in total in the years 2013 to 2017. In context, Tesla has just announced that it has been responsible for 1GWh of energy storage installations worldwide, while Siemens and AES, partners in new JV Fluence, has deployed around 463MW of storage between them to date globally.

The headline of this story has been amended from its original form to correct the MWh deployment statistic.