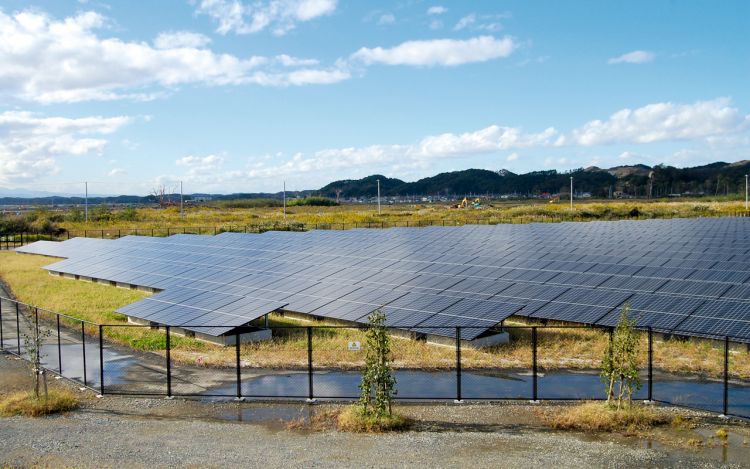 Solar farm in Higashi-Matsushima near Fukushima, also badly affected by the 2011 earthquake and tsunami. The project was built soon after the local village was destroyed by the waves. Picture taken on a site visit by the author. Image: Andy Colthorpe.

IHI Energy Storage, a Chicago-based subsidiary of Japan’s IHI Corporation, which supplies industrial equipment and builds infrastructure projects and energy assets, said yesterday that the project is going ahead at an unnamed location. It will be co-located with a “larger facility” being built by the parent company, but again, details were undisclosed at this stage.

Fukushima, on Japan’s eastern coast, was of course badly hit by the 2011 earthquake, tsunami and subsequent nuclear accident at the Fukushima Daiichi reactor. In addition to catalysing the beginning of Japan’s strong financial support for renewable energy in the form of a generous feed-in tariff (FiT) policy, the wake of the earthquake was marked with many announcements of solar farms being constructed as part of the area’s recovery efforts.

Just since July, our sister site PV Tech has reported on three large-scale PV projects in Fukushima, of 42MW, 29.5MW and 14.68MW. On a visit to the annual PV Expo show in Tokyo two years ago Energy-Storage.News was told by a local resident and writer, Tsutomu Kuji, that Fukushima wants to become a renewable energy hub as a key part of the rejuvenation process. Kuji said local businesses, residents and policymakers were making efforts in this direction. Meanwhile Fukushima wants to go 100% renewable energy-powered by 2040.

IHI, which earlier this year completed a 2MW / 6MWh battery energy storage system in Ontario, Canada, for Hecate Energy, said the Japanese project is intended to help accelerate the integration of increased proportions of renewable energy sources into local networks. This would alleviate “grid challenges”, IHI said, which have also been experienced in other areas of Japan with rising renewable energy generation capacities.

The project will create “an independently sustainable power system” and in addition to solar PV and battery storage will include hydrogen generation onsite and other technologies. Using LG Chem lithium battery racks and a 500kW bi-directional inverter from TMEIC, the system will be centred around IHI’s proprietary software, ESWare. ESWare incorporates a control system for backup power in the case of grid outages, as well as controlling the energy storage system’s (ESS’s) use for solar load shifting and smoothing applications. IHI is also putting the system under warranty.

“This energy storage system will change the landscape of generation and consumption in the region, creating an independent and resilient local grid,” Toshiaki Nishi, IHI Energy Storage managing director, said.

“The success of this effort relies on innovative software capabilities for immediate reaction to various energy needs, such as grid failure, renewable utilization, and other emergency situations.”