Forward-thinking US states charge ahead on energy storage

How some states are illuminating the path ahead with trailblazing regulatory, policy and market frameworks. By Sara Baldwin, VP of Regulatory Affairs at the US Interstate Renewable Energy Council (IREC)

In the US, energy storage has quickly become a featured issue among legislative and regulatory discussions across the country.

States are tackling a myriad of issues within legislation, executive orders and commission proceedings that will impact the overall cost and value of energy storage, the process of connecting energy storage to the grid, and the extent to which energy storage is integrated into long-term grid planning and operations.

As more states take steps to ensure energy storage can be integrated on the grid and contribute to the achievement of aggressive clean energy goals, the implementation details are critical. Although it may seem straightforward to integrate energy storage into state energy markets, the characteristics that make storage so valuable and attractive also make it challenging to address in policy and regulatory contexts.

Historically, aspects of the technology itself have made it less understood and more complex to integrate into state policy and regulatory frameworks, traditional utility planning and electricity markets.

New York has long been at the forefront of clean energy policy discussions. It has garnered significant attention over the past five years for its initiatives, including massive regulatory undertakings aimed to increase the resiliency of the electric grid and enable more efficient and equitable integration of distributed energy resources. Though its work is still underway, a major policy move in 2019 is certain to accelerate clean energy progress in the Empire State.

New York’s Climate Leadership and Community Protection Act calls for both 100% carbon-free electricity by 2040 and economy-wide, net-zero carbon emissions by 2050. Meeting these ambitious goals will require considerable effort, especially given the fact that New York is the third-largest economy in the country. To reach the new targets, the bill calls for a 23% increase in energy efficiency, 9GW of offshore wind energy by 2035, 6GW of distributed solar energy capacity by 2025, and 3GW of energy storage capacity by 2030. The storage target, approved by the New York Public Service Commission in December 2018, is one of the biggest targets set in any state.

Massachusetts has adopted policies to increase storage development through a multi-pronged policy strategy: clarifying the eligibility of energy storage to participate in existing programs, providing targeted incentives for energy storage, and setting a storage target of 1GW by 2025. In addition to allowing behind-the-meter energy storage to be eligible for energy efficiency incentives, the state also clarified that solar-plus-storage systems can qualify for net metering (a program that provides credit for energy generated from renewable energy facilities in excess of any energy used on site). The Department of Public Utilities (DPU) also made clear that solar-plus-storage system owners participating in the Solar Massachusetts Renewable Target (SMART) program can participate in forward capacity markets to earn additional revenue. Launched in 2018, SMART is an incentive program that will fund 1,600 megawatts of solar.

In addition, California, Nevada, New Jersey, and Oregon have also adopted energy storage targets or goals, which are setting the stage for substantial growth in the years to come. Oregon calls for a minimum of 10MWh of energy storage and 1% of peak load per utility. California added 500MW to its existing target (which initially called for 1,325MW by 2020). The Arizona Corporation Commission proposed a 3,000MW target by 2030, and New Jersey has established a 600MW by 2021 and 2,000MW by 2030 goal. 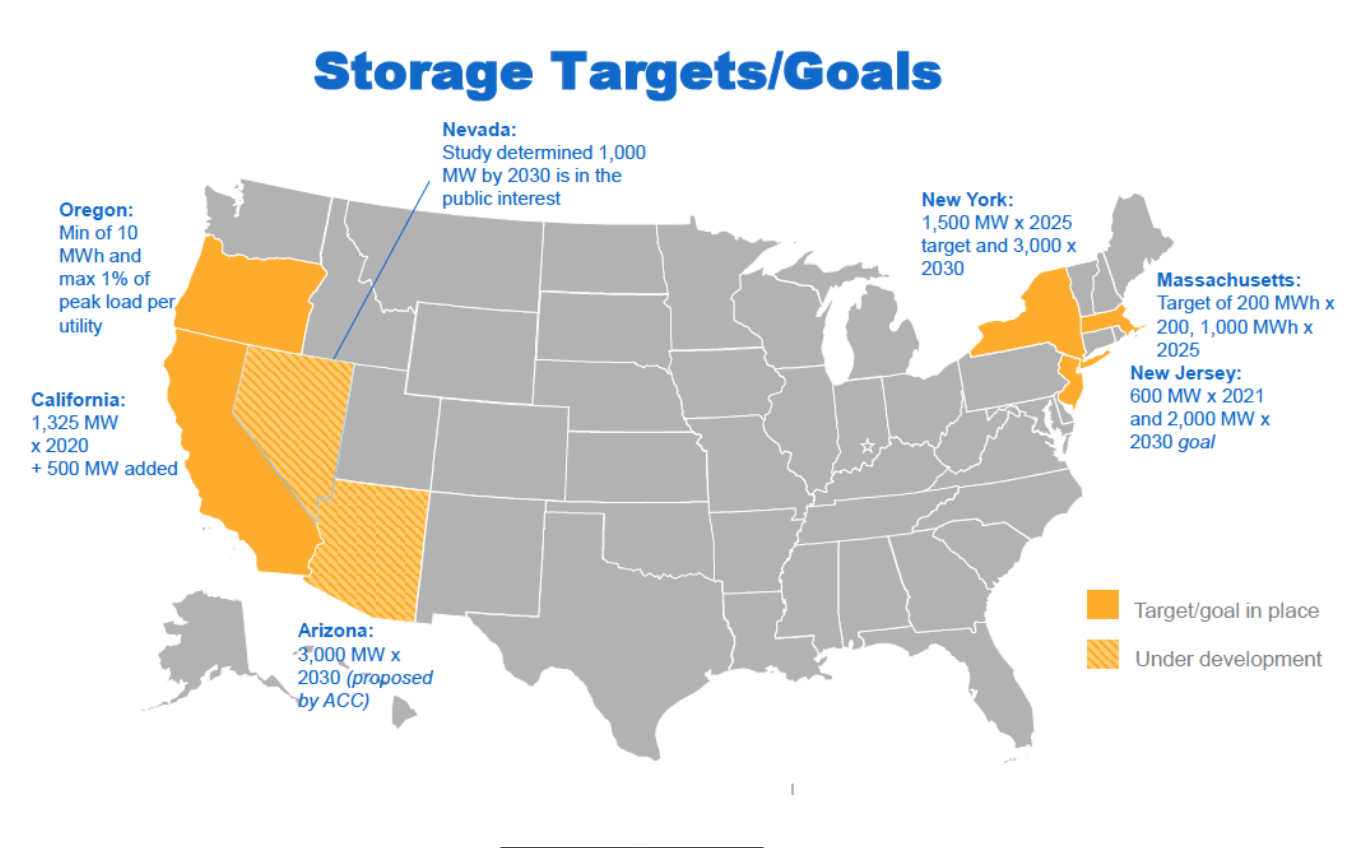 Joining together the electric dots

Perhaps most importantly, a handful of states are actively addressing energy storage in state interconnection rules and utility procedures, which is a key to setting the stage for strong energy storage market growth in the years to come.

States that are leading the way are specifying that energy storage devices are eligible to connect to the grid, and they are adopting clarifying language around how energy storage should be studied as part of the interconnection process. This includes specifying that the capacity of an energy storage system paired with solar and other distributed generation should be based on the actual design and intended use of the project, as well as the applicable controls that will be used to keep the system within the parameters of its intended operational profile. These clarifications are key to ensuring the unique flexibility and responsiveness of energy storage are given appropriate consideration in the interconnection process.

These spearheading storage states serve as important examples for others looking to advance ambitious clean energy policy goals, by including energy storage as a key component to a more robust grid of the future.

Cover Image & below: After years of preparatory work including regulatory wrangling, New York has begun deploying a pipeline of large-scale energy storage projects like the one pictured. Image: Key Capture Energy.