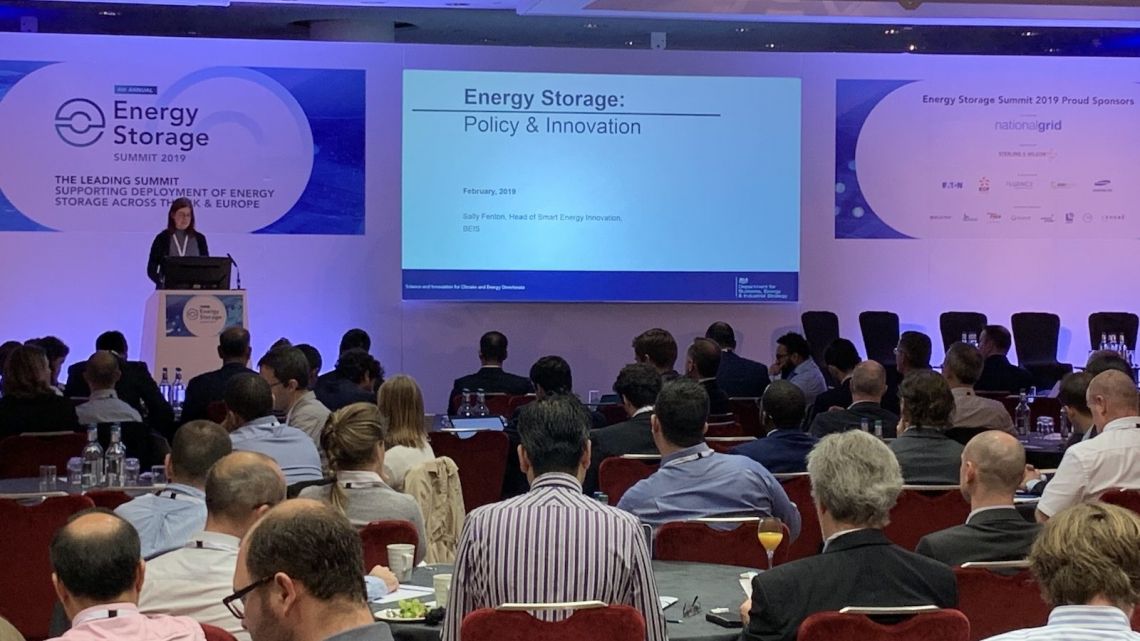 The Energy-Storage.News, Solar Power Portal and Current± editorial teams were present throughout the event, highlighting give key themes that emerged at a crucial time for the storage sector.

Deepening discussions and openness of plans and strategies

One big sign of maturity was the elevated level of discussions, now that the show has reached its fourth year. Topics previously off-limits due to commercial sensitivity or just a lack of experience from the field, were explored in depth.

Developers Zenobe Energy and Anesco, aggregator Kiwi Power and technology provider Belectric discussed the “Revised front-of-meter business model” with openness. For instance, Kiwi Power business development head Quentin Scrimshire said that the wholesale market might not offer as much opportunity in the UK as in other markets.

Brexit wasn’t discussed at any great length at Energy Storage Summit 2019, but it loomed over the conference in other ways. The country’s intent to leave the European Union has all but ground Westminster to a standstill and, as a result, meaningful policy movement is hard to come by.

The government and Ofgem’s Smart Systems and Flexibility Plan (SSFP) paved the way for a small regulatory revolution for battery storage but has yet to deliver the kind of change necessary to stimulate the sector. A definition for battery storage has yet to be written into the Energy Act – BEIS still awaits a window of opportunity for that – and double charging remains an issue.

And, in a double blow for the sector, where policy is evolving, it’s doing so at storage’s detriment. Ofgem’s Targeted Charging Review stands to almost counteract the SSFP if it’s enacted as intended, prompting questions from the Summit’s audience about how the two pieces of legislature can co-exist.

Local authorities are playing an increasing role in advancing the deployment of energy storage in the UK. Image: West Sussex County Council.

The world is changing fast – a presentation from Samsung SDI highlighted that the South Korean battery maker plans to ramp up to 30GWh of production in 2020 to 100GWh by 20205, predicting a total market size of 116GWh by that later year.

While Samsung SDI sales director Marinella Massacesci said that the utility sector is expected to dominate this, that’s not to say the impacts – or opportunities – won’t filter down. The final session of the 2019 London Summit included presentations from local authorities and their partners.

One company, iPower, is conducting Smart Solar & Storage, a project with Aberdeenshire County Council in Scotland. PV-plus-storage will be installed at 500 properties, with the view to extending it to 7,000 homes.

iPower managing director Jon Cape said that to date, “social landlord battery storage pilots [in the UK] have been based on just one benefit of battery storage, time shifting solar PV generated in the daytime for evening use,” which he said was “great”, but the Aberdeenshire project would also see time-of-use tariffs and grid services also explored.

The business case must work out as the council is required to fund most of the project. Similarly, Jeremy Martin, energy and sustainability manager for Southend-on-Sea Council, said his authority is developing standards for energy storage. Standardised offerings, with clear benefits to the end consumer, may help persuade homeowners invest in storage, rather than requiring financing from the council.

Honesty, the surest way out of the financing crossroads

From Blackrock to Gresham House, top investor names gathered at the London conference to examine how far energy storage has come in its search for long-term financial stability

The sentiment was that unlike PV, its more-established co-location partner, storage will likely have to navigate the winding path to maturity without subsidies. Those turning to PPAs for revenue certainty may find they “tie you up” in ways energy storage cannot afford, Eel Power’s Mark Simon warned.

The good news is storage’s inherently more profitable nature means it may not need subsidies anyway. Speakers were bullish on the industry’s prospects if it learns to tap into rising appetite for flexibility and volatility, and manages investor expectations along the way.

As Gresham House’s Ed Simpson put it: “We think we’ll give investors the return we believe they’re looking for. We just don’t know what that is – as long as we can be honest and don’t promise too much.”

Funds are perhaps confident of providing investors the returns they’re looking for at least in part as a result of the continued evolution of revenue stacks.

A poll of the audience at the Summit sought to ascertain which was the most important revenue stream for battery storage assets moving forward and the most popular answer, by some distance, it has to be said, was wholesale trading, leaving ancillary services markets and the Balancing Mechanism second and third respectively.

This poll demonstrated a marked change of attitude in the 12 months since the Summit’s Beast from the East-hit 2018 edition, where the Capacity Market was the talk of the town. The ongoing threat to the CM has been widely documented and new developments this week certainly will not have eased investor concern, but the fact is that the storage industry is becoming more accustomed to energy markets and their many roles within them.

The Balancing Mechanism encapsulates that perfectly. A year ago, battery storage assets were still locked out but the likes of Limejump and Flexitricity have proven their suitability to such an extent that National Grid has established a specialised desk at the control room for these.

Speaking at the Summit, Anesco chairman Steve Shine intimated that there was a significant amount more room for storage in the Balancing Mechanism, and that would appear to be a common view.