ESA: US grid, economy, jobs to benefit from 35GW of energy storage by 2025 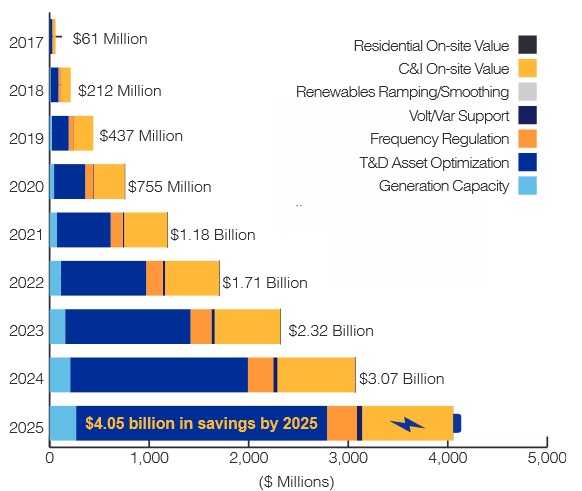 The US national Energy Storage Association (ESA) has advocated that the nation should aim to deploy 35GW of energy storage by 2025, claiming it could result in US$4bn of network cost savings and generate 167,000 jobs.

ESA has just issued a white paper, “35×25: A Vision for Energy Storage”, mapping a pathway to a “disruption-proof grid”, identifying the opportunities that exist to reach that ambitious deployment figure. By the year 2025, under a scenario in which energy storage is widely able to provide frequency regulation, managing network voltage, capacity reserves and other services and benefits as well as being of on-site value to the system host behind-the-meter, for example in helping businesses reduce their electricity costs or households to consume more of their own rooftop PV energy.

Adding up all of these services and benefits scales up from a modest US$61 million value today, mainly in those behind-the-meter benefits for commercial and industrial (C&I) customers, to over a billion dollars by 2021 (as estimated US$1.18 billion), US$2.32 billion by 2023 and reaching US$4.05 billion by 2025. As the years will progress, ESA – and analysis partner Navigant Research – sees the value of energy storage for transmission and distribution (T&D) asset optimisation rise significantly from being a barely noticeable portion this year, into 2022 or 2023, when ESA appears to assert it will be the single most high value application of energy storage.

Indeed, this ‘grid side’ deployment of energy storage will far outweigh deployments by individual customers, ESA believes. By 2020, if the US is installing around 2.7GW in a year as predicted, more than 2GW of that will be deployed by utilities and other grid stakeholders like transmission system operators and by 2025, more than 8GW of a predicted 9.2GW will be grid side deployments.

ESA really puts the emphasis on energy storage’s role in creating a more resilient, efficient, sustainable and cost-effective grid network, focusing on the macro level transformation not just from fossil fuels to renewables, but from centralised generation to distributed and decentralised.

While in the past, grid assets were more or less executing similar functions from system to system, meaning utilities and other network planners only had to make decisions based on lowest cost, the direction of travel to distributed energy solutions makes the situation more complex. Simply scaling up the size of the grid to meet increased demand often also scales up problems with grid-balancing and can make peaks in demand across the system even steeper.

This makes an old-fashioned grid “ineffective at adapting to change”, ESA said, adding that it means “ratepayers are obligated to pay for a system that is overbuilt and overburdened with underutilised assets that will take decades to pay off”.

While other vital commodities in society are routinely stored, like grain, fuel for transport, natural gas and so on, only around 20 minutes-worth of North America’s daily electricity demand is stored with critical networks holding about 10% of daily demand as storage, which ESA calls “insufficient to meet today’s needs”.

Disruption is not always a buzzword for ‘futuristic’

Obviously while in Silicon Valley circles, “disruption” is a term that implies a rapid step change that transforms an industry for the better, in the context of electrical grids it is something to be avoided. Grids are often disrupted by variable weather conditions and changing demand profiles, for which gas peaker plants are called on to address. But according to ESA, peaker plants could be utilised at just 5% to 7% of their capacity, leading to millions of wasted dollars – again a role that energy storage, itself considered a disruptive technology, could fulfil.

The curtailment of renewables, caused because the grid goes into oversupply at times and is unable to accept any more solar or wind power, is another potential value-killer and energy storage could also prevent this from destroying business cases for renewables projects or losing opportunities to decarbonise the energy mix.

Demand peaks, which can account for 40% of total system costs from just the top 10% of peak demand, also increase the cost of distribution and transmission of energy, due to the need to build substations and other infrastructure to deal with them. Again, energy storage can help mitigate these peaks.

In a recent interview with Energy-Storage.News, clean tech investor Jigar Shah said that backup power in the case of outages is an increasingly valuable use of energy storage for customers, although it is particularly difficult to put exact figures on that value, given that outages are unpredictable by their very nature. In the case of households, there is not an easy economic costing methodology to attach.

However, ESA’s white paper provides some illustrative figures. The value of lost load (VOLL) for a C&I customer is estimated at as much as an average US$20,000 per lost megawatt-hour. The growing numbers of data centres in the US rely heavily on their power being uninterrupted and a figure quoted from IHS Markit analysis said this could equate to US$9,000 lost dollars-per-minute, or more.

Demand for energy is rising, ESA said, while the grid is not getting any younger, and the migration to renewables and decentralised energy networks provides compelling long-term drivers that mean the role energy storage has to play can continue to grow well into the 2020s. Many changes are already taking place on the grid at the upper level, such as the growth of more ‘holistic’ integrated resource planning (IRP) by utilities that take in long-term planning concerns. ESA also gives sets of recommendations for actions legislators, regulators and utilities should take to reach 35GW by 2025.