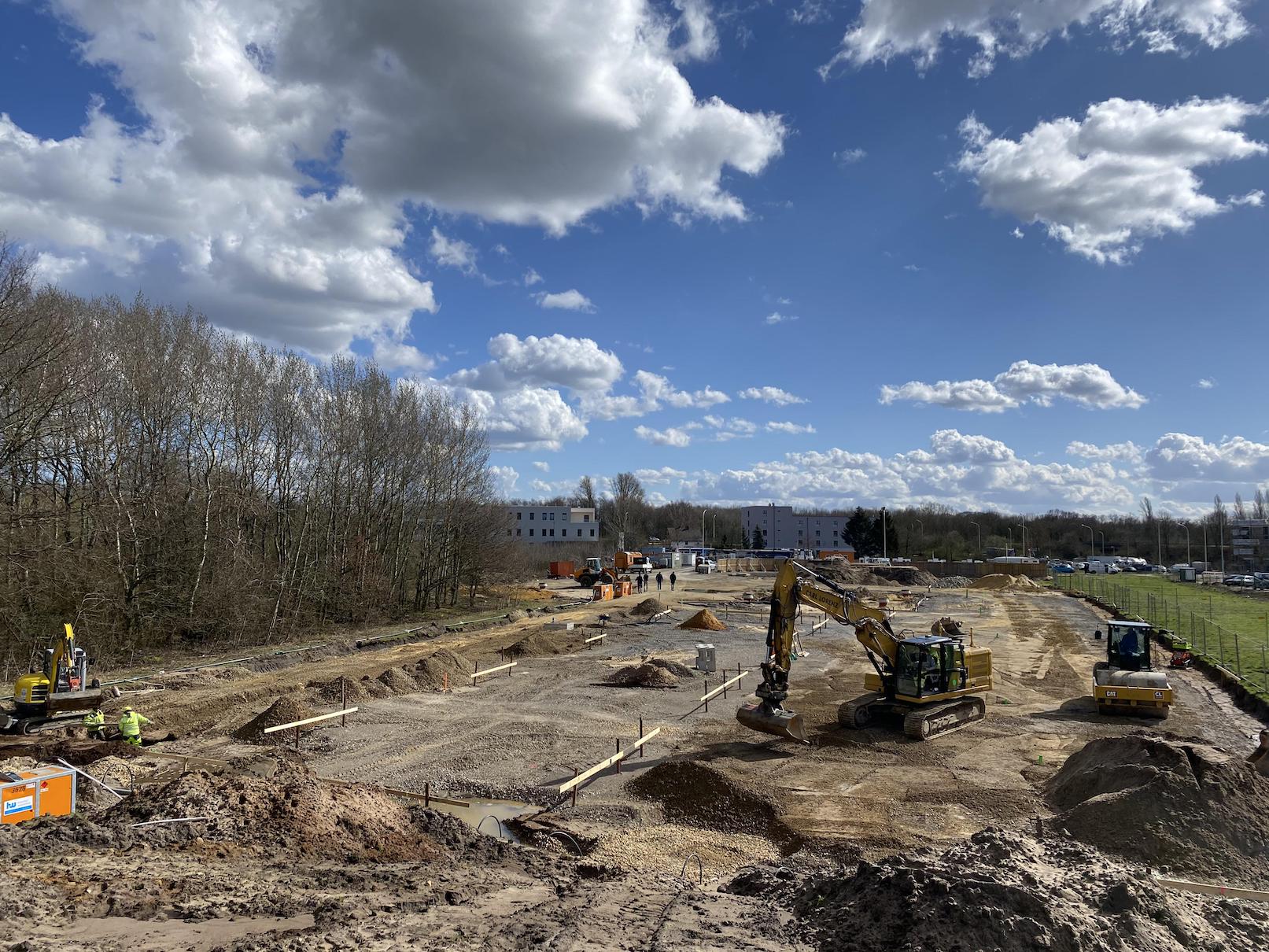 Construction works at what will become known as the Seed & Greet park, with 114 charging stations for electric vehicles. Image: Roland Schuren.

What’s being described as Europe’s largest electric car charging park will be kitted out with 2MWh of stationary battery storage systems from Tesvolt, charged with “green energy from the grid”.

From both a technical and economic point of view, it makes sense to deploy battery energy storage at facilities that can charge multiple electric vehicles (EVs), Tesvolt CTO and co-founder Simon Schandert told Energy-Storage.news this morning.

“Charging electric vehicles results in high peak loads. These are usually expensive, as they require utility companies to keep more energy available in the grid. Energy customers who cover their peak loads using a storage system instead can save a lot of money,” Schandert said.

The charging park is being built at the site of an organic bakery at Kreuz Hilden junction, which connects two motorways in North Rhine-Westphalia, Germany. Multiple providers are setting up a total of 114 charging points, including fast chargers: 40 V3 Tesla Superchargers and 22 Fastned fast chargers adding up to 350kW, alongside eight public charging stations which will add up to 22kW of load. Meanwhile the remaining 44 charge stations will be used by the employees and clients of park owner, enterprising baker Roland Schuren.

A 700kW rooftop solar PV array will be used to charge every one of the stations, while two small wind power installations will help deal with those peak loads. The Tesvolt battery systems will be used to store the energy generated from the renewable energy facilities. It's the latest such project to demonstrate the close synergies between the electric vehicle space and stationary energy storage.

“The charging stations can draw solar power directly from the on-site PV installation or from the connected storage system, which is also charged with green energy from the grid at times when prices are low,” Tesvolt’s Simon Schandaert said.

“At the same time, storage systems allow users to avoid high electricity connection costs. If the output of local utility companies is insufficient, the storage system can simply make up the difference.” 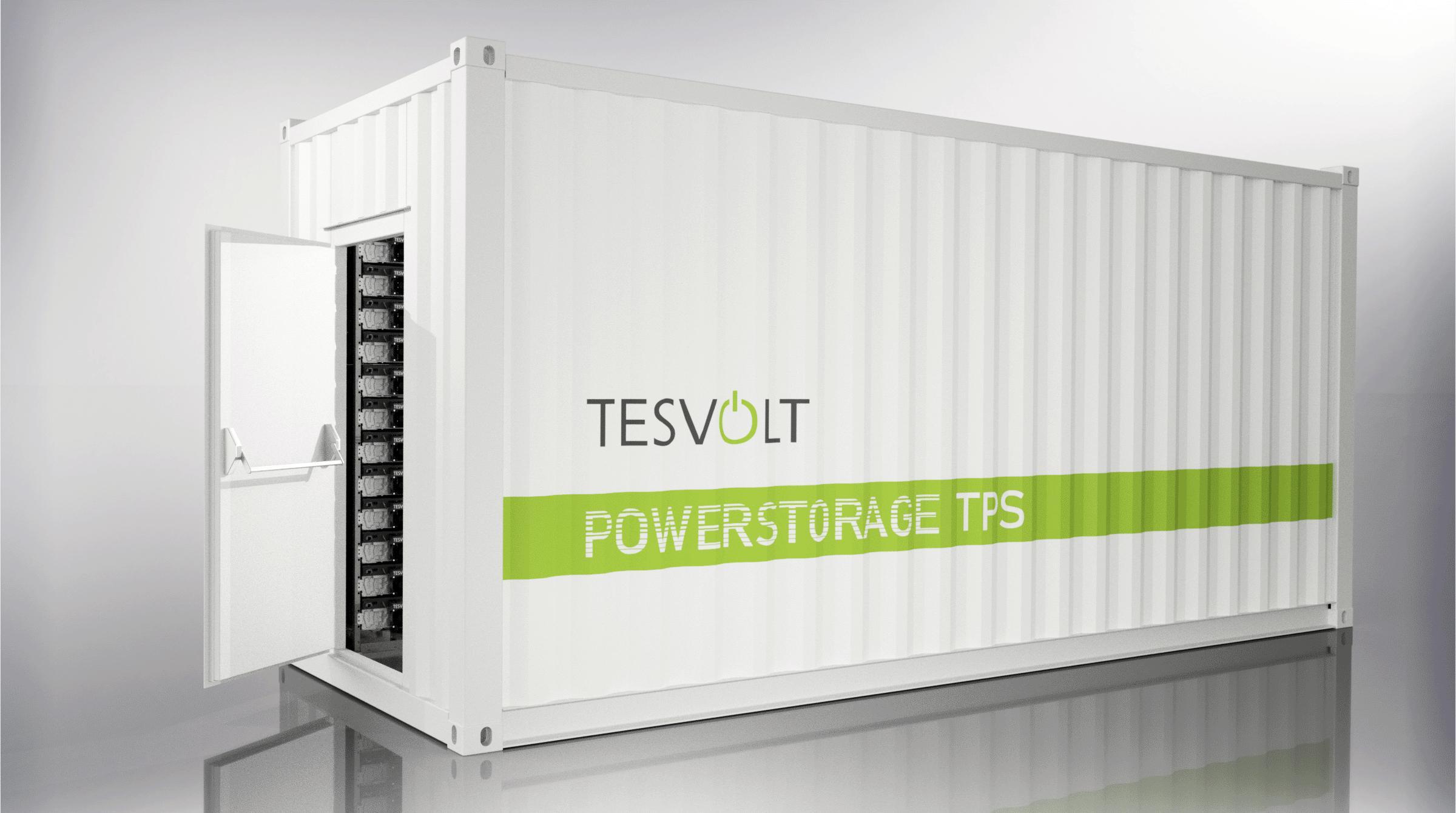 ‘I want to show that climate conservation is not only essential for environmental reasons, it also pays off economically’

As well as serving the immediate needs of the car charging park, the Tesvolt CTO said the energy system is also adaptable and could, “without the need for any technical modifications”, perform a variety of other tasks with associated business cases, such as energy arbitrage. This could prove to be important in the coming years as the economics of grid-connected energy storage, currently very strong for electric vehicle-related use in Europe, will grow to include a multitude of other applications. Tesvolt, which builds systems using Samsung SDI prismatic lithium-ion nickel manganese cobalt (NMC) cells, recently opened up its assembly 'gigafactory' in Germany – while obeying strict guidelines on social distancing and other COVID-19 transmission prevention rules.

The Seed & Greet Park, as it is being called, allows charging station users to relax while their vehicles are juiced up and enjoy Schuren’s freshly baked bread or pastries, while on site there is also a four-storey vertical farm growing fruit and vegetables, which the bakery’s waste heat is used to keep warm, as well as to provide hot water and heating for other onsite facilities.

“We bakers are really feeling the effects of climate change,” Seed & Greet park’s owner Roland Schuren, who already uses electric and natural gas powered vehicles for deliveries and adapted his bakery to use an eco-friendly energy system, said.

“The dry weather over the past few years has made the flour obtained from our organic farmers much harder to process. With the Seed & Greet charging park, I want to show that climate conservation is not only essential for environmental reasons, it also pays off economically.”

In somewhat related news, battery energy storage project developer Pivot Power today announced that fleet electric vehicles have arrived at the Oxford Energy Superhub in England, for which Pivot is delivering what it claims to be the “world’s most power charging network”. Of particular interest to readers of Energy-Storage.news is the fact that the energy storage solution at that site is a hybrid lithium-ion (50MW) and vanadium redox flow battery (2MW) system, which you can read more about on our sister site Current± as it reported on progress at the Superhub earlier today.