The ‘Second Life’ project is located at a conventional power plant in Melilla operator by the company’s Spanish arm Endesa.

The company says that each battery pack removed from the vehicle is placed directly into the overall storage system exactly as it was in the vehicle, without the need for disassembly.

Melilla is located in a Spanish enclave on Moroccan coast and its 90,000 residents’ electricity needs are served by a local microgrid powered by Endesa’s power plant. In the event of the power plant disconnecting, the BESS will be able to inject power into Melilla’s microgrid for 15 minutes allowing the plant to reset and restart the grid power supply.

This will help Melilla’s electricity grid operator avoid load shedding events, improve the reliability of the grid and secure the continuity of network service to the local population, Enel said.

Second life projects using EV batteries for various use cases are springing up across the sector. One expert recently wrote a guest blog on Energy-storage.news saying that up to 30% of EV batteries can be re-used and US national lab UL is looking at the technology in partnership with Hyundai.

Just last week, Jaguar Land Rover launched a mobile 125kWh BESS solution for EV charging which used batteries from its Jaguar I-PACE SUV. That production required disassembly with 85% of materials re-used though as a mobile solution will need to take up less space than a stationary one.

And at the start of the year, second life Audi EV batteries from its e-tron line were used to deliver a 4.5MWh BESS at a pumped hydro energy storage (PHES) plant in North-Rhine Westphalia run by energy group RWE. The firm said the batteries still had 80% of their residual capacity when taken out of car use.

Energy-storage.news has asked Enel for an equivalent figure from Nissan’s EV batteries and will update this story when a substantive response is received.

Enel claims its renewable arm Enel Green Power is the largest privately-held renewable company with 54GW of renewable generating assets, as well as 300MW of storage and 80MW of behind-the-meter storage installations to-date. 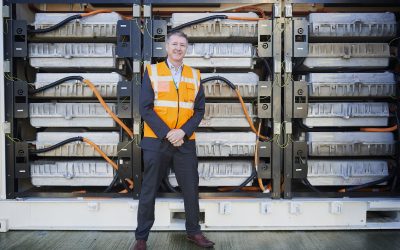