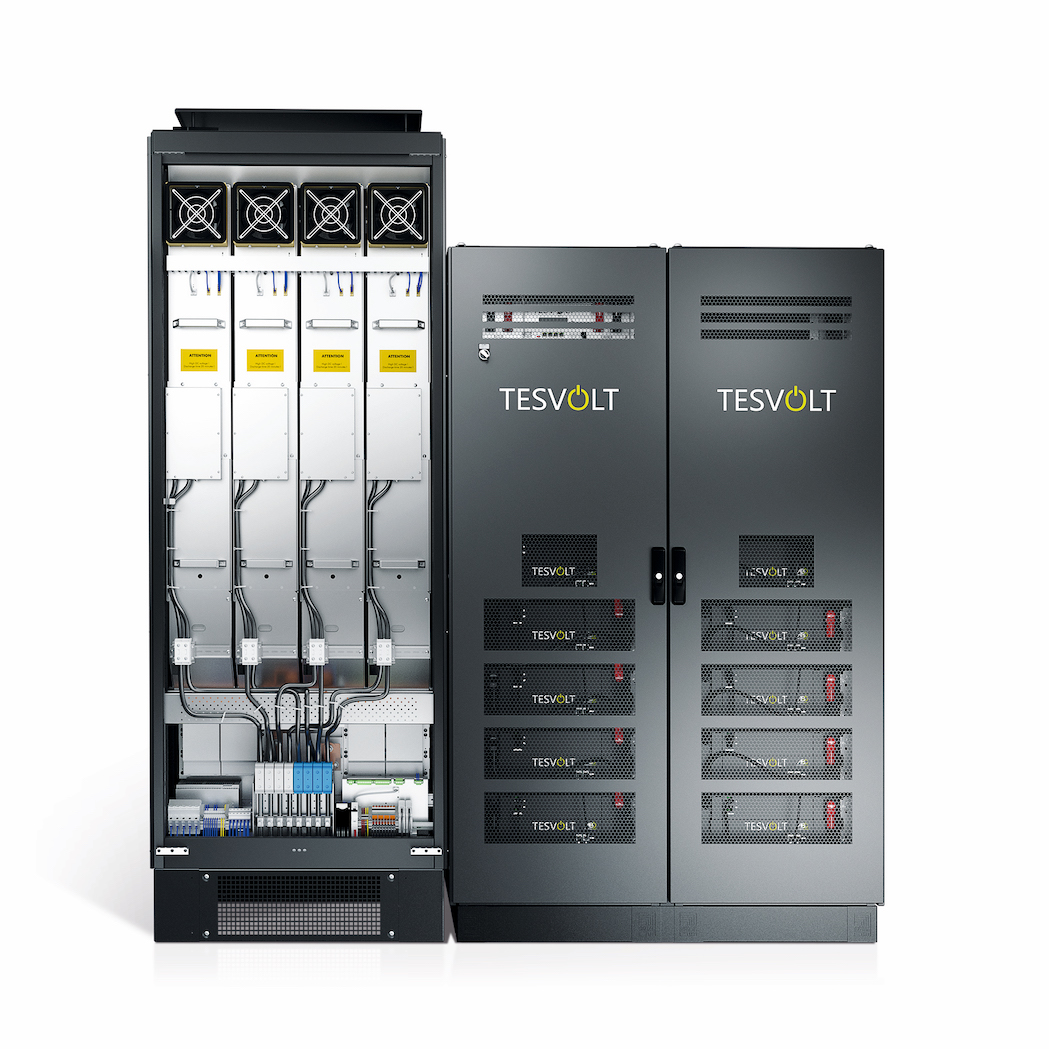 Launches of a new “allstar” commercial energy storage system and a large-scale storage solution designed to be moved from one site to another with ease demonstrate the changing needs of customers for versatile and flexible energy storage options.

German battery energy storage system (BESS) maker Tesvolt has launched a new commercial-scale product that offers “practically every function one could wish for,” while in the US, another maker, KORE Power, has begun a joint venture (JV) which will provide mobile plug-and-play large-scale storage.

Tesvolt’s new product, the TS-1 HV 80, comes with integrated energy management system (EMS) and inverter technology. It is designed to offer commercial and industrial (C&I) entities peak shaving functions that lower their energy costs by reducing their draw of electricity from the grid at peak times, but also offers onsite backup power and ensures quality of power supply to industrial facilities which can reduce downtime and prevent undue wear and tear on equipment. Tesvolt's systems use energy-dense nickel manganese cobalt (NMC) lithium-ion batteries and the company said that the new product's compact design allows for 340kW of battery system to be installed with a footprint of less than 0.5sqm.

The system is available from 76kWh up to multi-megawatt configurations through modular expansion and is equipped with a three-phase inverter with 75kW capacity. Its built-in EMS records load profile measurements and optimises self-consumption as well as backup power functions, while it can operate on- or off-grid, as well as islanding while on-grid. Tesvolt claimed it can also perform black starts of power equipment and can offer responses to grid signals within milliseconds.

The company recently delivered a 2MWh battery storage system for what is thought to be the largest EV charging park in Europe, and during the COVID-19 lockdowns last year opened a factory for its ESS systems in Wittenberg, Germany, with 255MWh annual production capacity — with social distancing measures in place.

Tesvolt founder and chief technical officer Simon Schandert said that with the new product, the company’s aim was to “develop a true allstar” adding that the TS-1 HV 80 is “unmatched in terms of versatility”.

“It has practically every function one could wish for and is therefore even more effective in tapping the potential to save electricity costs,” Schandert said.

The new company said it will be providing utility-scale mobile ESS units which are integrated with a docking system. Aiming to lower barriers to entry in the energy storage market for utilities and C&I customers, Nomad said its solution is a “flexible, reliable way to incorporate storage for their varying use cases”. Offering a moveable solution which is designed as a simple 'plug and play' option is intended to bring down many of the upfront costs and logistical challenges for customers.

Three models are expected to become available this year, with 600kWh, 1MWh and 2MWh configurations and variable power output up to 1MW ac. Nomad said there is a patent pending for its docking system PowerDock, which enables easy connection and disconnection as well as easy maintenance, setup and control of the BESS. All of the Nomad units have a common interconnection design which allows for modular expansion of capacity and capabilities with the adding of more units.

Energy-Storage.news has reported on a couple of European providers that have offered mobile energy storage units for grid purposes: in November, ‘Battery Box,’ a project in the Netherlands was announced that will see 3MW of ancillary frequency response services come from 600kW / 660kWh mobile battery units made by ENGIE. When they’re not being used by grid operator TenneT for that application, they can be wheeled out to outdoor events such as festivals where they can provide a temporary power source.

Also in the Netherlands last year, renewable energy retail company GreenChoice said it was developing BESS docks in partnership with engineering company Greener Engineering. The dock units would be charged up at GreenChoice wind farms and then sent over to customers that need a mobile or emergency power source. Like ENGIE’s Battery Box project however, the individual units are smaller than those being produced by KORE Power’s Nomad JV, with 10 Greener Engineering systems adding up to just over 3.5MWh in total.

KORE Power builds battery energy storage systems (BESS) in the US and is currently developing a 12GWh factory site in North America that it hopes to get underway with soon. The company also has a 2GWh factory in China, although KORE also wants to become an early participant in the US’ domestic lithium-ion battery cell manufacturing space in future too. Like Tesvolt, KORE Power relies on nickel manganese cobalt (NMC) battery cells, which the company has previously said can be a bankable and safe option for the US stationary energy storage market. The new Nomad JV will be headquartered in Vermont, where partner Northern Reliability is based.

This article has been amended to reflect that Northern Reliability is a systems integrator and solutions provider in the energy storage space and not a project developer as was originally published. Additionally, KORE Power's 2GWh battery storage factory in China is already up and running, and not still under construction as was originally reported.