National Grid has reduced its forecasts for electricity storage capacity in the UK down to just 10.7GW by 2050 in the most ambitious scenario set out within its future projections for the energy sector.

The latest Future Energy Scenarios (FES) document, published on Thursday, suggested the greatest level of storage would be deployed under its 'Consumer Power' scenario, which predicts a highly economic market driven by innovation over environmental concerns.

However, in the same scenario in 2016’s document, National Grid predicted 18.3GW of storage by 2040, with both years’ forecasts suggesting storage would predominantly be used at the distribution network level to accommodate rising local energy.

Speaking at the FES 2017 launch event, National Grid’s head of energy insights Marcus Stewart explained the reduction is down to “improved” modelling used to determine the amount of storage capacity needed to smooth generation in each scenario.

“Last year was the first year we included battery storage in the scenario modelling and we had a reasonably simplistic approach. This year we've built on that and improved the modelling in that area, so the values we've calculated this year are lower because we've looked at the arbitrage value and if you go to a theoretical maximum, you start to see the cannibalisation of revenues,” he said.

Discussing this “cannibalisation”, the FES 2017 document adds that beyond the opportunities presented by arbitrage or fulfilling various ancillary services to the grid, any additional storage will absorb revenue from other storage or flexibility providers, meaning that projects are less likely to be economically viable

Stewart continued: “We've brought that down this year so that we've got to a level that we think storage will be economic as a business case.

“The way we've modelled that is to look at the amount of renewable energy on the system, what the load profile looks like and then dispatching between the different time settlements to see how storage could be used to balance renewables against the load. So it's been more sophisticated in the modelling to bring that level down.”

In contrast to the Consumer Power scenario, the lowest level of storage is under Steady State – focused on short term thinking and security of supply – with initial growth tapering after the early 2020s and reaching only 5.2GW by 2050. 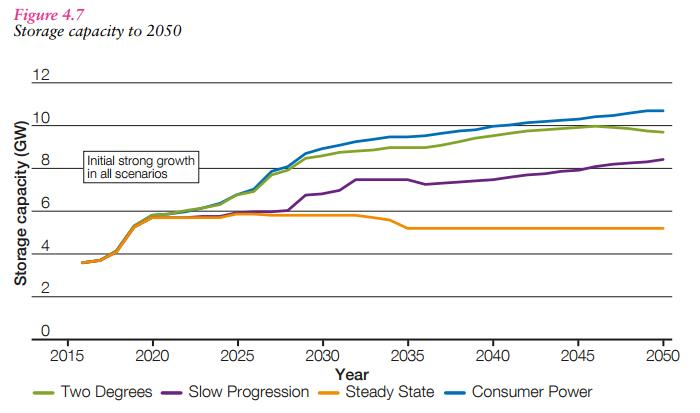 The most recent figure published by Solar Media’s in-house market research team places the combined figure for completed and pipeline battery storage projects at 2.8GW already, a figure which is expected to grow considerably quicker than National Grid’s lowest expectation suggest. The transmission network operator says electricity storage capacity across all technologies totalled 4GW in 2016 and could grow rapidly to almost 6GW by 2020.

However, Stewart point to limited visibility over the developing pipeline of storage projects that has made it difficult to build a full picture of how quickly the market will develop.

“In terms of large scale storage, to date we haven't got sufficient data points to feed that in. We need the evidence and projects to actually come to the market that will deliver that. So when those projects start coming along we [will] get much better clarity of that pipeline…but we need some more evidence for that,” he said.