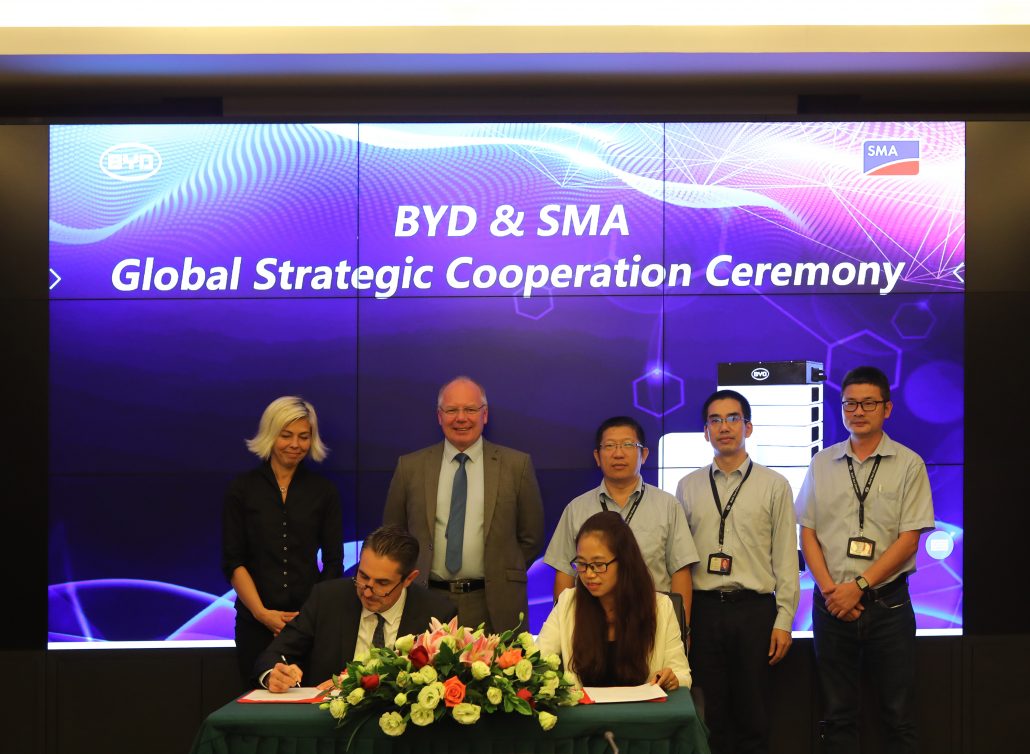 Quoting an expected doubling in installed PV capacity over the next five years, a partnership between Chinese battery storage system maker BYD and European PV inverter company SMA is targeting the USA market, identifying it – along with Africa – as having “high growth potential” for the pair’s products.

Building on existing collaboration in the Asia-Pacific region and latterly Europe, where BYD is aggressively pushing electric vehicle (EV) lines including contracts to supply electric buses to local authorities in the UK and sponsoring London football team Arsenal as its ‘official EV partner’, an agreement was signed at BYD HQ, Shenzhen, China.

The pair have been partnered since 2015 through combining BYD’s low voltage ESS (energy storage systems) and SMA’s Sunny Island inverters, adding high voltage lines in 2017, BYD today quoted Solar Energy Industries Assoication (SEIA) statistics from the US which have forecast more than 14GW of solar to be installed in that country annually by 2023.

While SMA once held a market share of around one-third of inverters installed for utility-scale solar, the company has been fighting to adapt in the face of competition from other inverter makers and from the growth in more distributed smaller-scale PV systems. An August 2017 interview with now-departed CEO Pierre-Pascal Urbon referred to the then-SMA chief’s belief in “exponential growth potential” in some markets for energy storage and the company has added capabilities to pair battery systems of different makes and models in various iterations of products including the Sunny Boy inverters. Urbon announced his intention to step down from the SMA board earlier this month, our sister site PV Tech reported, with managing board member Dr.-Ing. Jürgen Reinert taking over at the end of the year.

The pair will “jointly develop technical solutions as well as driving joint marketing for these solutions aimed at the residential and commercial energy storage market”, BYD said, as well as offering bundling energy storage solutions for customers. Meanwhile as might be expected SMA and BYD’s experiences in the off-grid sector will be leaned on to address markets in Africa.