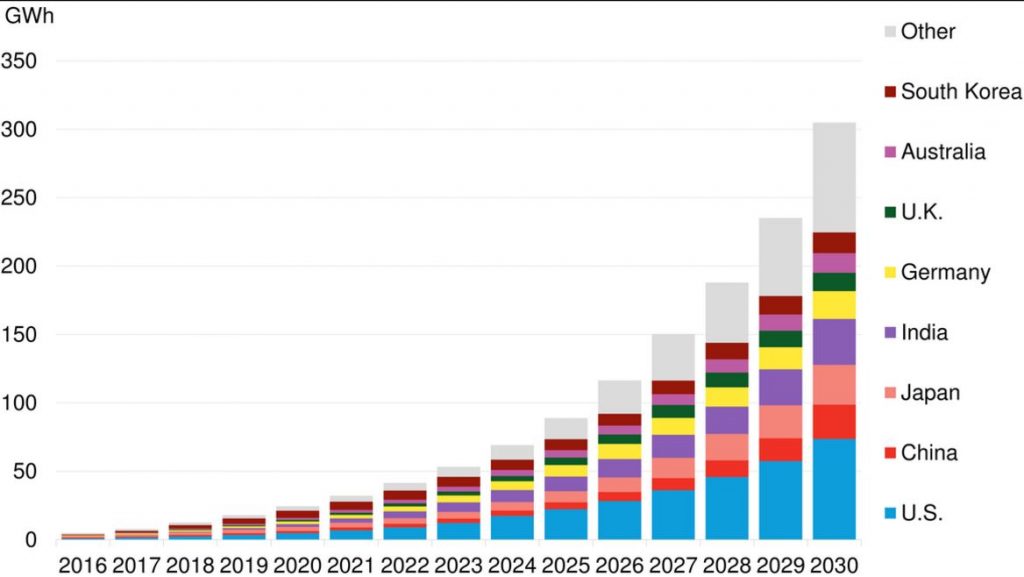 The rise of energy storage will enjoy a similarly meteoric trajectory to that enjoyed by solar PV deployment in the past and could reach 305GWh of installations by 2030, BNEF has predicted.

BNEF calls the expected rise of energy storage during this time as having a “similar trajectory” to that seen in the solar PV market globally between 2010 and 2015. In those five years solar PV capacity doubled seven times over. It is expected that around US$103 billion could be invested in the technology to facilitate this expansion into the mainstream.

While BNEF considers that that sum will be invested, broadly speaking, equally across the regions of Asia-Pacific, Europe, the Middle East and Africa and in the Americas. Despite this, around a quarter of all deployments are expected to be in the US, with 70% of all installed capacity predicted to be spread across that country as well as in China, Japan, India, Germany, Australia, South Korea and the UK.

“Energy storage, both utility-scale and behind-the-meter, will be a crucial source of flexibility throughout this period and will be essential to integrating increasing levels of renewable energy,” BNEF staff wrote in a statement.

At the beginning of this year, the International Renewable Energy Agency (IRENA) claimed that around 1GWh of battery storage was in use worldwide by the electricity sector, predicting that it could rise to 250GW by 2030 in its “REThinking Energy 2017: Accelerating the global energy transformation” report.