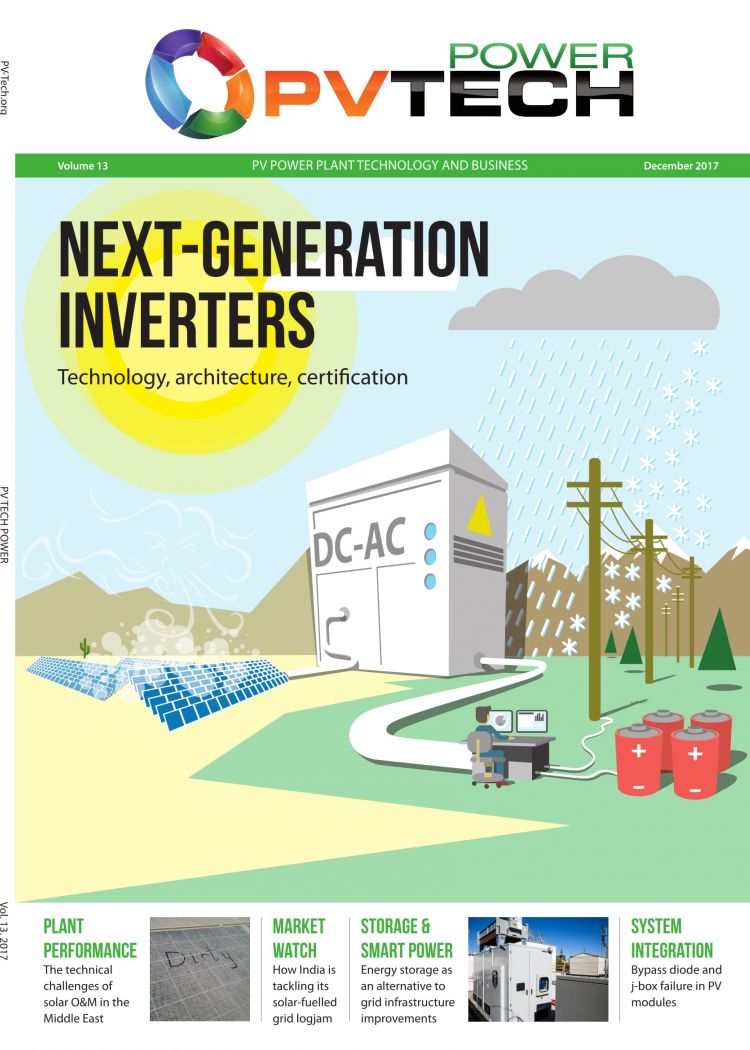 “Hype meets reality” when the worlds of digitalisation and the grid collide. The digital ledger system blockchain has been both praised and misunderstood in equal measure and its relationship to the physical world of electrons is at its earliest stages of exploration. In the latest ‘Storage & Smart Power’ section of PV Tech Power, Carsten Reincke-Collon, CTO of Younicos looks at how energy storage and management software will interact with blockchain-led or blockchain-like systems of data processing and recording. PV Tech Power is a quarterly technical journal for the global downstream solar PV industry from our publisher Solar Media, with the 'Storage & Smart Power' section brought to you by Energy-Storage.News.

“Blockchain became famous as the technology behind the Bitcoin digital currency. But its decentralised nature, fault tolerance and security also make it suitable for many other applications, ranging from identity management to food traceability.

“Energy trading is a great fit too. Blockchain allows for the creation of an automated trading platform that links producers and consumers in real time and lets them engage – via “smart contracts” – in a (quasi-) direct transaction.

“The electrons thus sold still don’t go straight to the buyer, but both parties know that at the (exact) time in question, one party is producing just the amount of energy that the other party needs. Provided both parties are also physically close (which is a big if ), this transaction has relatively little impact on the grid.

“As almost all contributions on the subject point out, blockchain has the potential to make a utility redundant by enabling consumers and (independent) producers or prosumers to trade directly without any intermediary.”

Reincke-Collon goes on to look at both the potential – and potential limitations – of this exciting innovation.

Theory was put into practise when grid operator TenneT ran a blockchain-driven trial to trade and share renewable energy across Germany and the Netherlands via the grid. Jean-Baptiste Cornefert of Sonnen, whose systems and controls were used, contributed a case study for this issue of PV Tech Power.

Elsewhere, Navigant Research analyst Alex Eller explores the growing interest in the strategic and smart deployment of energy storage as a more cost-effective and efficient alternative to investment in the grid. Transmission and distribution (T&D) network operators could increasingly look to such non-wires alternatives (NWA) to expensive infrastructure assets like substations.

“The electric T&D system is a constantly evolving machine that requires continual monitoring, maintenance and upgrades. Traditionally, the required upgrades to the T&D system were relatively easy to predict and could utilise a consistent and standard set of grid equipment and infrastructure to meet growing electricity demand. Rapidly evolving technologies and evolving customer demands have made predicting and performing grid upgrades much more complex in recent years.”

Factors such as the growth of renewable energy and the need to meet future load increases with the addition of EVs and chargers are meeting head-on with evolving regulatory environments and favourable economics, Eller writes, leading to a number of projects already going ahead – mainly in the US, to date, to address these issues.

Always informed, often outspoken, a conversation on energy storage and solar-plus-storage investment with Jigar Shah rounds off our last edition of the journal for 2017. As you may have seen in last week's news story, Shah thinks 2018 will be a combative year for the industry, as utilities start to see energy storage projects as desirable assets to own.

We also talked about revenue stacking, how institutional investors and other capital can be brought into the sector on a big scale, financing community solar and why his speciality is negotiating the Wild West frontier of the good, the bad and the misunderstood deals.

All of this exclusive content is available as part of PV Tech Power Volume 13. We’ll be posting individual articles on the site too in the coming weeks and most papers will be archived and available free of charge in the ‘Resources’ section of the site shortly.