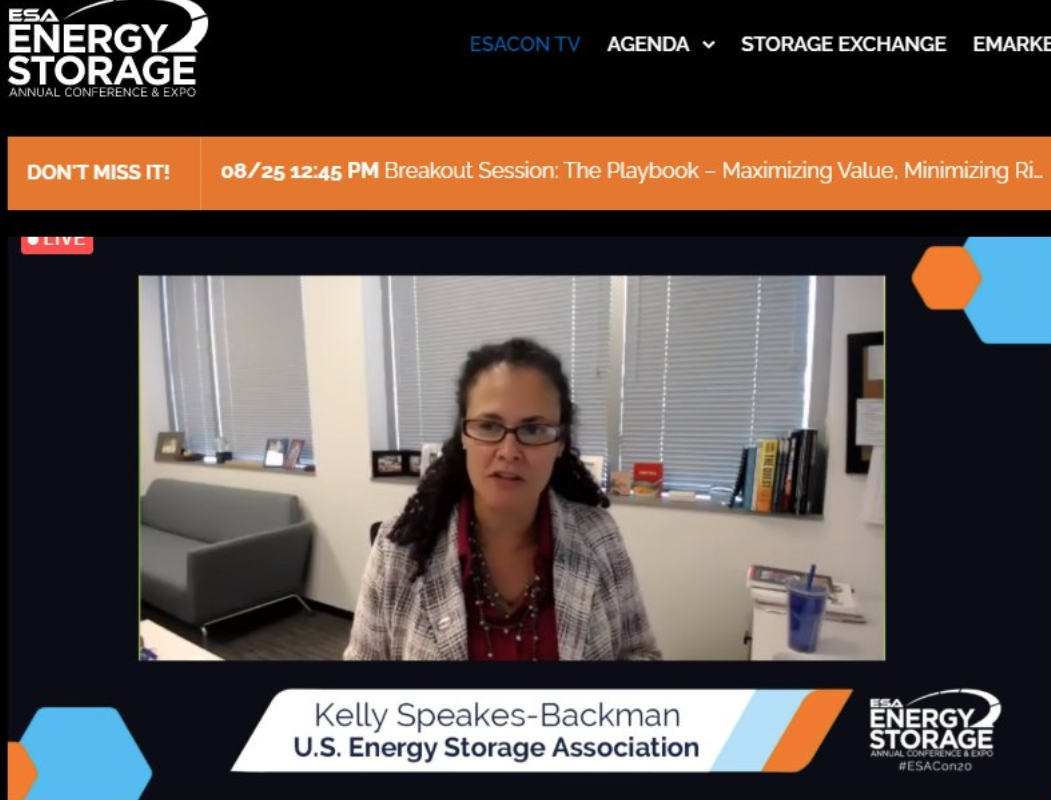 Kelly Speakes-Backman, CEO of the national Energy Storage Association (ESA), has been named in the newly appointed senior leadership team at the US Department of Energy (DoE).

Speakes-Backman, appointed as the first-ever CEO of the trade association in 2017, has been appointed by the incoming administration of President Joe Biden and Vice President Kamala Harris as Principal Deputy Assistant Secretary for Energy Efficiency and Renewable Energy. Speakes-Backman and other appointees took up their posts on 21 January 2021.

A former utility commissioner in her home state of Maryland, Kelly Speakes-Backman has been leader of the ESA during a period of fast growth and rapid scale-up for energy storage in the US, with more than 2GW installed during that time. In a recent interview for Energy-Storage.news, the now former ESA CEO said that the association expected to see at least 3.6GW of storage installed during 2021, and ESA published ‘Vision 2030’ a while ago, citing that the deployment of at least 100GW of energy storage on the grid is both desirable and achievable.

In that interview, Speakes-Backman said that the prospects for energy storage were exciting. Joe Biden’s recognition of the importance of energy storage as essential infrastructure for a clean energy transition during his candidacy for the top job was a very encouraging sign for the times ahead, she said. Having said that the ESA looked forward to working with Joe Biden and Kamala Harris’ government over the next four years, Speakes-Backman will herself get the chance to be part of that team directly instead.

The ESA’s Board of Directors said it is “thrilled for Kelly to take on this role and look forward to seeing her flourish as a key leader driving the country’s clean energy future”. The Board reiterated that it looks forward to working with the new presidential administration as well as with Congress, “to promote policies that can help us realise the full potential of energy storage for our country”.

In the meantime, ESA’s vice president of policy, Jason Burwen, has become interim CEO of the trade association, which represents hundreds of stakeholders throughout the entire US energy storage value chain. Burwen has been ESA’s policy lead since 2015.

“I have full confidence that under the leadership of Jason, the dedicated and incredibly talented team at ESA will continue to carry out its mission ensuring the voice of energy storage is heard in Washington, and by regulators and state lawmakers across the country,” ESA chairman of the board John D Hewa, president and CEO of Rappahanock Electric Cooperative said.

Will the Energy Storage Association’s recommendations also be taken on board?

Kelly Speakes-Backman tweeted after her first full day at her new workplace yesterday that she was “honoured to serve”.

“Overwhelmed with warmth for all the good wishes I just read through today. Thank you, friends. I’m honoured to serve, and pray I can do it well. Our planet depends on it”: @KSpeakesBackman.

Tributes and endorsements poured in from industry and trade association colleagues all over social media, including New York Battery and Energy Storage Technology Consortium (NY-BEST) which said from its official account that it is “thrilled to see an #energystorage champion in this role” (@NYBatteryEnergy).

Former colleague and now ESA interim CEO Jason Burwen said that both the association and the energy storage industry “thrived under her leadership, and I'm excited to see the acceleration of progress in solar, wind, storage under her watch”: @jburwen.

It will be interesting to see if some or all of the specific recommendations from ESA for the Biden-Harris Administration and the 117th Congress that Speakes-Backman discussed in her interview with this site in late November might be taken on board. These, in her words, included the following priorities:

(2) Increase spending for investment in manufacturing, demonstration and RD&D for energy storage innovation

(3) Invest in electric system resilience, as supported broadly and on a bipartisan basis in the American Energy Innovation Act (AEIA)