Last week Energy-Storage.news reported that by separating the compositional materials used for the catholytes and anolytes of a lithium cell, the team at 24M had achieved an energy density exceeding 350Wh per kg, with a view to establishing a 100MW production line for pilot projects “by the end of this year”.

While admitting that commercialisation remains an estimated two to three years away, 24M, spun out of an MIT laboratory by founder Yet Ming Chiang to investigate solid state and now semi-solid lithium battery materials, claims its latest ‘breakthrough’, Dual Electrolyte Technology, heralds a new era to come for advanced lithium batteries. Andy Colthorpe spoke to some of the company’s leadership team to find out more. 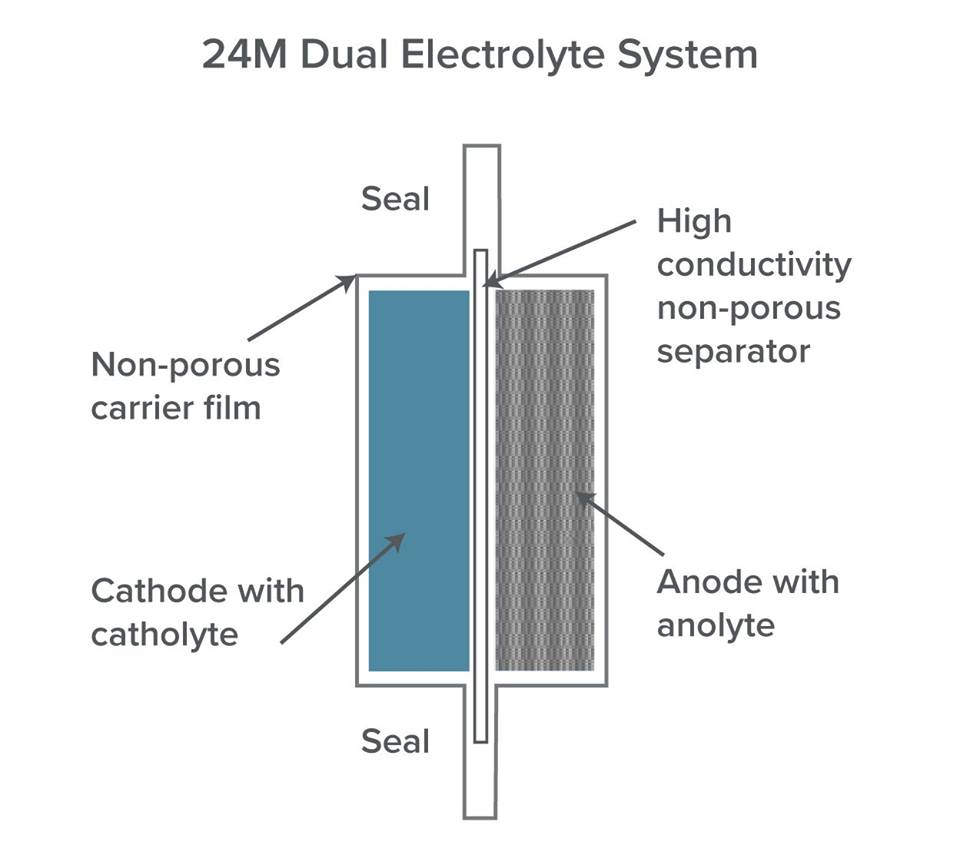 According to Rick Feldt, 24M president and CEO, Rich Chelbowski, CFO, and to senior director of products Joe Adiletta, the Dual Electrolyte tech is one of the “layers of improvements” that the company’s battery manufacturing platforms could add to both LFP (lithium iron phosphate) batteries for stationary storage applications and NMC (nickel manganese cobalt) for mobility applications.

Advanced energy storage projects, mainly using lithium batteries, began to take off after a fairly extended period of demonstrations and pilot projects. Will it be a similar run-in towards commercialisation for semi-solid batteries?

Rich Chlebowski, CFO: For the grid storage space, we’re working on this through one of our partners… they have been in discussion with a number of customers to leverage this output [from our forthcoming 100MW production line]. We have a number of customers that have expressed a lot of interest because of the approach and the potential for very low-cost, high-performance lithium batteries with the semi-solid approach. They have a strong interest in procuring and buying, but more on the demonstration level.

We’ve made smaller quantities of cells in a pilot line we have here in Cambridge, MA, and cycled them for thousands and thousands of cycles and proven that the fundamental cell architecture is as reliable, or maybe even more reliable, than competitors’. But in terms of the application side, we haven’t had the volume to work on that yet.

How much further does 24M need to go before it can unveil a full, commercialised platform for high volume production, with levels of demand to match?

Rick Feldt, President and CEO: No one can predict how long these things take. The solid-state guys have been promising [commercialisation] in the next three to four years, but it’s probably still five to 10 years away.

My guess is that we’re a couple of years away from this being commercialisable – so, two to three years is my best guess. As you make these solid devices they tend to become very brittle. There are still a lot of challenges coming to make this commercially viable at commercial scale.

We’ve now built enough samples and made enough progress. We started out at relatively low energy levels, meaning [around] 250Wh per kg. We’re [already] well above the 350Wh per kg energy density referred to in the recent press release. We’re making progress every day and moving at a good pace – but to make batteries that work the number of cycles that people want will take at least a couple more years.

What the company is hoping to achieve. Image: 24M.

You mentioned both NMC and LFP cells, both suitable for different applications. Can you elaborate on how 24M’s tech platform can work with different sub-chemistries of lithium-ion?

RF: In terms of different applications, we see that the specifications for EVs and stationary storage are going to diverge and continue to diverge further and further.

In stationary storage, it’s about cost and cycle life, sort of your two principal requirements. For that, it’s sort of a long duration requirement. Today, most things are two to four hour, but we think over time, particularly for the utility-scale it’s going to move from two to four, four to six, possibly longer, but in that range.

With our technology, because we’ve patented the thick electrode, as we go to longer duration, our cost advantage advances. Energy density is not critical for most of those applications, so we think that an LFP based battery with a thick electrode, long duration, large format for bulk energy storage is going to be the key attribute. There’ll be a very different battery than what we make for EVs, where energy density in both Wh per kg and Wh per litre are going to be critical.

So it’ll be a different chemistry, different design, faster charge requirements than what you’ll see in the grid storage space.

How will that work in terms of the differences in costs between the two basic NMC and LFP sub-chemistries?

RF: LFP chemistry is substantially lower cost at the moment than NMC, which is the principal high-energy density chemistry. Today, for the most part, people tend to repurpose an NMC into their grid storage business. We think that over time that will become less and less viable.

Both markets are going to be enormous. EVs are larger and likely to remain larger but the stationary storage market is going to be enormous, particularly if you can establish a cost structure to allow you to compete against gas peakers. That’s still a little way off, you still have to initiate cost reduction on the anodes but we think we can tailor a battery design. The requirements for a peaker replacement are different from even a traditional stationary storage option. By tailoring the materials and battery design etc, our technology can help us compete in that market space as well. 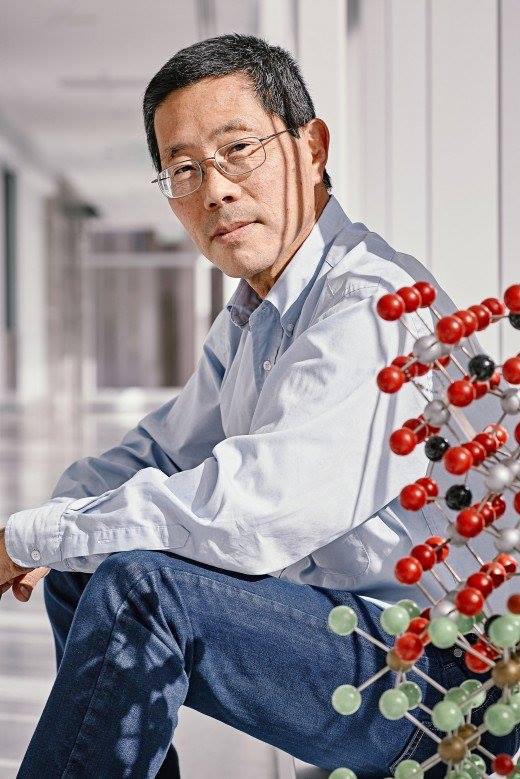 Flow battery providers are expecting long duration storage applications to be looking beyond lithium and in terms of the lifecycle, there’s a hope that something else will come along to compete more directly with lithium.

Joe Adiletta, product manager: I think that the near-term prospects for flow batteries are poor at best for a couple of reasons. The first is that they’re really only economically viable at the eight hour+ duration. As technologies like ours proliferate and as the cost of lithium-ion continues to go down and as the scale continues to go up, flow battery guys are continuing to fight upstream.

The issue is that there is no scale to speak of and the only way to get to scale is to have a compelling cost advantage vs lithium-ion. You can see the cost projections for lithium-ion and I don’t think flow is going to be in that ballpark, or just barely in there if at all.

There’s a US Department of Energy programme called ARPA-E, they recently funded a proposition for ultra-long duration storage (100 hours+ of energy storage). That’s where I think there could be innovation but to be clear there’s no market for that today.

They’re funding all of this early stage research on the assumption that once large-scale grid storage proliferates, there’s going to be a need for weekly to seasonal type storage. I think there’s a valid case for that and there’s a lot of technologies that could be uber low-cost but for the moment the bridge is lithium-ion from two to four hours, moving to eight hours as you look at peaker replacements and that sort of thing.

Lithium takes about 95% of the stationary storage market in maturing markets such as the US and has been on a ‘mainstream’ scale for about four to five years. What’s the remaining lifetime of lithium-ion at the top of the tree and is 24M in a race against time to commercialise its technology?

JA: I don’t think there is anything today in the offing that has the look to supplant lithium-ion as the emerging grid and/or EV electrification technology anytime in the near future. It’s likely not sulfur, not likely to be flow. The reality is that, as somebody around here used to say: “the dirty little secret about lithium-ion is that the future of lithium-ion is lithium-ion”.

It’s been that way for three decades now. Since the first lithium-ion cell came out of Sony and Sanyo in the early 90s and it’s a sort of steady, methodical development. Incremental, but over the decades that incremental development adds up. So you’re looking to move to higher nickel content cathode materials and higher energy anode materials and safer separators, better electrolytes, thinner foils and all of this stuff is accretive to energy density, cycle life and safety gains over time.

So I think the runway for lithium-ion is certainly great, I think that our competitiveness in the lithium-ion marketplace has very, very, good potential, both on the cost and the performance side of things. So we think about it kind of as price performance. We have a platform that allows us to have better cost for any given semi-solid electrode designed architecture and we have, using that semi-solid technology, have those unique vectors towards high-performance development that we intend to leverage over time as well.