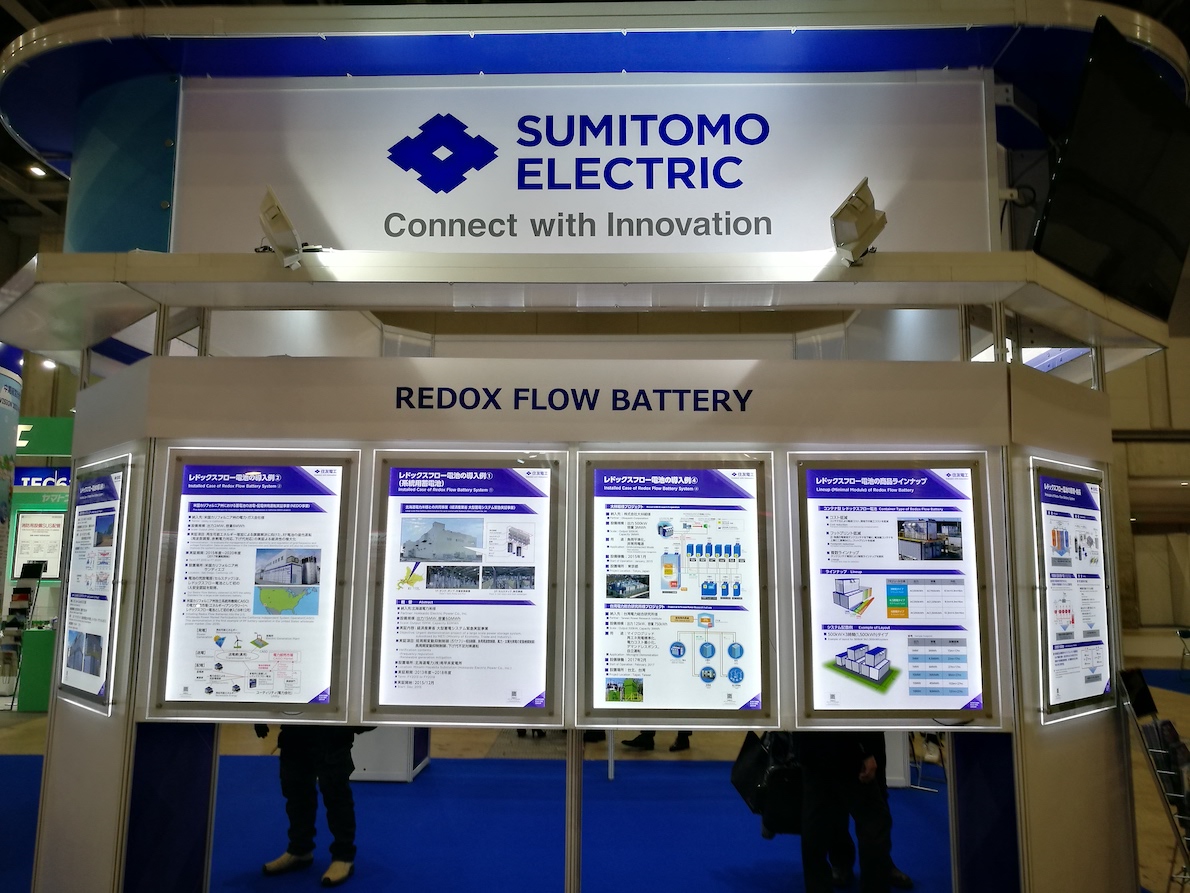 Sumitomo Electric will begin constructing the 17MW / 51MWh vanadium redox flow battery (VRFB) system on the island of Hokkaido during this Japanese financial year (JFY), capable of storing energy for three hours and connected to the wind farm. The project will be completed by the end of March 2022.

Sumitomo Electric Industries, a supplier of products related to automotive, electronics, infocommunications, industrial materials, environment and energy, has already deployed the world’s biggest flow battery system so far, in the same region. Completed in 2015, that demonstration project was 60MWh total capacity. The company has also done smaller projects in territories including the US and Europe.

Sumitomo Electric said in a press release that with this project and further sales expansion of redox flow batteries, the company will “contribute to the introduction of renewable energy and the reduction of greenhouse gases”. While the majority of recent global grid-scale energy storage systems use lithium-ion batteries, the electrolytes in flow batteries do not degrade over long periods of charging and discharging and can withstand many more cycles.

This means that in theory, they may be more suitable for long-duration, bulk storage of energy than lithium batteries, which are generally more suited to high power, fast-response applications that balance the grid. Sumitomo also pointed out that its flow batteries can be operated at room temperature and do not run the risk of thermal runaway, which can cause fires or the release of dangerous gases, as lithium batteries have done in some extreme cases.

The northern Japanese island of Hokkaido is populated by more than five million people but has limited interconnection with the rest of the country. Japan’s electricity network is split into 10 separate regions and Hokkaido Electric Power is the main power utility for the island.

Each of those utility companies historically also managed the power grid and delivery of electricity as well as generation in their region. With Japan’s energy system undergoing a lengthy process of deregulation, the transmission and distribution (T&D) network arm of each of those utilities was legally separated from the generation side in April this year.

Hokkaido’s T&D operator, Hokkaido Electric Power Network Co is currently investigating how to enable the grid intgration of larger shares of renewable energy and is working on a joint programme with the national New Energy and Industrial Technology Development Organization NEDO, as well as with another regional utility, TEPCO.

The network company has already determined that new wind and solar plants must be equipped with equipment to control their grid output, with a recently completed solar farm in the region among the first in Japan to be combined with large-scale battery storage. Hokkaido Electric Power Network targeted deploying around 600MW of wind farms between 2017 and 2022, to be combined with about 90MW of four hour duration battery storage in the first phase of a push for greater wind capacity and then a second phase of about 400MW of wind power and 60MW of four hour duration battery storage is expected to begin, with timescale and other considerations to be decided on dependent on what the company – and region – learns in the first phase.

28 July 2020: This article has been amended from its original form to reflect that Sumitomo Electric Industries is not a subsidiary of Sumitomo Corporation, as was originally stated.